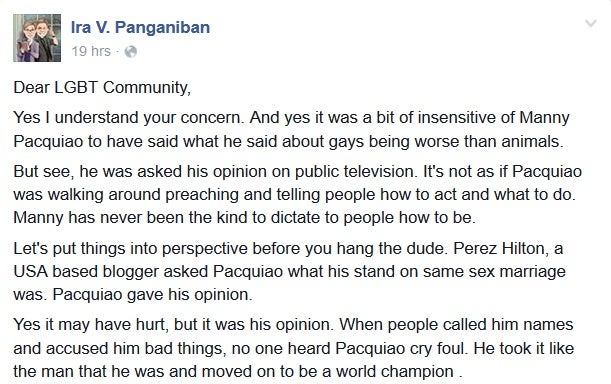 Such was the statement of Radyo Inquirer 990AM anchor Ira Panganiban amid the flurry of jabs boxing champion Manny Pacquiao has been getting following his derogatory comments on same-sex relationships.

In an interview with TV 5’s “Bilang Pilipino” election coverage, Pacquiao described members of the LGBT (lesbian, gay, bisexual and transgender) community who are engaged in same-sex relationships as “worse than animals”.
While Panganiban said Pacquiao’s comments were “a bit of insensitive,” he defended the senatorial aspirant, saying he was just asked about his public opinion on same-sex marriage.

“But see, he was asked his opinion on public television. It’s not as if Pacquiao was walking around preaching and telling people how to act and what to do. Manny has never been the kind to dictate to people how to be,” he added.

Panganiban cited the numerous times people called Pacquiao names and accused him of bad things but “no one heard Pacquiao cry foul.”

“He took it like the man that he was and moved on to be a world champion,” he added.

“When the same members of the gay community made fun of him and his mother, Pacquiao took it all in stride. When people blast him for his intelligence, the champ did not get mad, when they called him idiot, he just went and won championships,” added.

But now that the LGBT community dislikes Pacquiao’s opinion, Panganiban said, “they cry like little babies condemning him to high heavens.”

In a phone interview with INQUIRER.net, Panganiban said critics of Pacquiao “overreacted” over his statements.

He said the LGBT group only accepts the “thinking that agrees with their line of thought.”

“They should have just respected Pacquiao’s statement,” he added.

In his Facebook post, Panganiban went on to ask who the real bigot is, drawing from the meaning of the word itself.

“Guess what the definition of “Bigot” is? Here, let me tell you, “bigot – a person who has no tolerance for the belief and opinion of others and forces their own opinion on others,” he said.

“Now, who is the bigot? Who cannot take the opinion of others and forces their belief on him? Take a wild guess,” he added.

He ended his post saying, “Bestest to all, Not A Gay Hater Me.” CDG