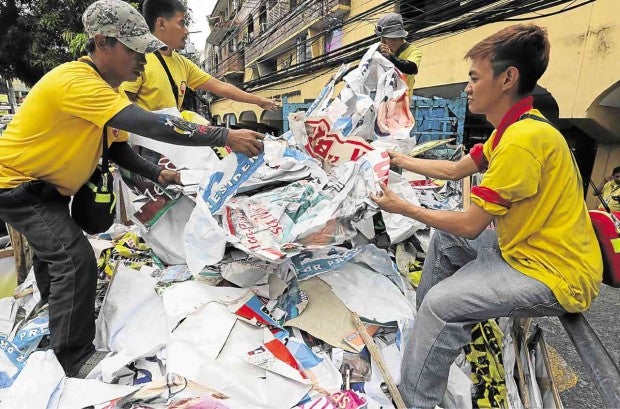 OFF TO BETTER USES The confiscated streamers and posters can be turned into bags, aprons, tool belts, laundry baskets, etc. JOAN BONDOC

The Metropolitan Manila Development Authority (MMDA) has turned over for recycling to an environmental group a truckload of election materials which were removed for being posted illegally.

In a simple ceremony at the MMDA headquarters in Makati City on Thursday, MMDA General Manager Corazon Jimenez and MMDA Metro Parkway Clearing Group head Francis Martinez gave to EcoWaste Coalition the tarpaulins, posters and small flags, among other materials, that were taken down from lamp posts, electrical wires and footbridges.

Under Oplan Baklas, MMDA personnel have been going around Metro Manila since Feb. 9 to remove campaign materials displayed outside the common poster areas designated by the Commission on Elections.

Tolentino ads among them

Martinez said he expected more election paraphernalia to be posted outside Comelec-approved areas in March, the start of the campaign period for local candidates.

“It’s good that, so far, once we have cleared an area, no one dares to put up posters or election paraphernalia again,” he added. Martinez took this as a sign that candidates or their supporters were finally learning that ignoring Comelec rules would result in their campaign ad funds going to waste.

“It can even be a ground for their disqualification because once you are featured in a seized campaign material, your name is reported to the Comelec,” he stressed.

“The seized campaign materials are valuable resources that should be put to good use…. It will be such a huge waste if these illegal election paraphernalia are buried in landfills. We can and should find appropriate uses for them,” EcoWaste Coalition coordinator Aileen Lucero said.

Tarpaulins could be “repurposed into coin purses, pouch bags, grocery bags and beach bags,” Lucero told reporters, adding that these could also be “sewn into mail and shoe organizers, worker’s aprons, tool belts, laundry baskets and even as receptacles for office or household recyclables.”

“(But) tarpaulins cannot be repurposed for certain applications that could contaminate food or expose young children to chemicals of concern such as cadmium and lead,” she said.

Before sending the materials to EcoWaste partner groups based in communities, these will first be screened for toxic metals using a portable X-Ray fluorescence device.