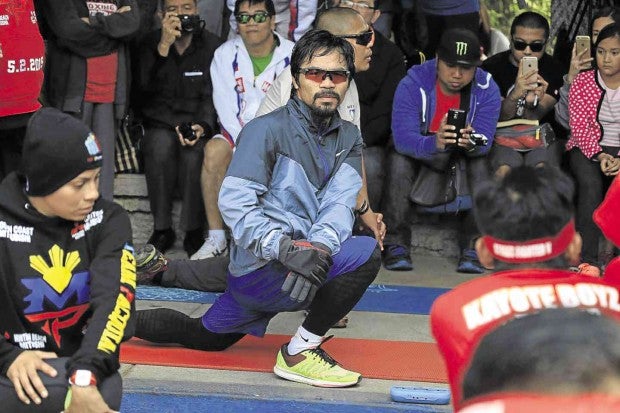 NO LETUP Despite his apology for his antigay remarks, boxing champ Manny Pacquiao (center) continues to reap flak. REM ZAMORA

—no thanks to his antigay remarks on Monday that the global brand described as “abhorrent”—but Pacquiao also faces the possibility of being disqualified in May’s senatorial elections because of his upcoming fight with American boxer Timothy Bradley on April 9.

Former Akbayan Rep. Walden Bello on Thursday called on Pacquiao to voluntarily postpone his fight with Bradley or he would be liable for disqualification in the 2016 elections, as the bout in the middle of the 90-day campaign period would “mean hours and hours of coverage before, during and after the fight.”

This, Bello said, translates into “massive free advertising” for the boxing icon to the disadvantage of other senatorial candidates.

“Manny is a great boxer, and I am a fan, but now that he is also a senatorial candidate, he needs to understand that election laws must apply to everyone. There are limits to political advertising,” Bello, also a senatorial contender, said in a statement.

Bello said he believed that his idol “understands the concept of sportsmanship and fair play” and would reschedule his fight after Election Day.   If Pacquiao does not, Bello said, he would be forced to file a case seeking his disqualification.

In a statement, Nike Inc., the world’s largest sportswear maker, said it had ended its contract with Pacquiao after his “abhorrent” remarks describing same-sex couples as “worse than animals.”

“Nike strongly opposes discrimination of any kind and has a long history of supporting and standing up for the rights of the LGBT community,” the statement added.

Nike’s decision came a day  after an online petition was launched urging the company to stop Pacquiao from endorsing its products.

Pacquiao, who won world boxing titles in eight different weight classes during his 20-year career, suddenly fell from grace after a 30-second interview on local television about same-sex marriage, which he opposes.

Same-sex marriage is not allowed in the Philippines, where more than 80 percent of its 100 million population is Roman Catholic.

“It’s just common sense. Do you see any animals of the same-sex mating? Animals are better off, they can distinguish between male and female,” Pacquiao said on Monday.

“Now if men are mating with men and women with women, then they are worse than animals,” he added.

Despite his apology on Tuesday, the boxer continued to reap bad blood both here and abroad for his antigay remarks, with his promoter Bob Arum scrambling to contain the damage done by Pacquiao’s comments.

“What he’s saying is diametrically opposed to what I believe.  I’m in favor of gay rights and same-sex marriage,” said Arum, who is promoting Pacquiao’s upcoming fight with Bradley.

The boxer could lose some other fight sponsors because of the remarks, he added.

Arum described Pacquiao as an evangelical Christian who believes that homosexuality is wrong, adding the boxer was trying to win votes in the Philippines, where the issue of same-sex marriage had not been decided.

“What he said is completely for home consumption for Filipinos wrestling with the question of legalizing same-sex marriage,” said the boxing promoter.

“It’s like if Donald Trump was a boxer and I was promoting Donald Trump when he was running for president. I would be killed by the media for all the stupid statements he is making,” he added.

It’s not the first time that Nike severed its business ties with Pacquiao, who was previously involved in a furor over gay rights. In 2012 he was quoted as saying he was against same-sex marriages because “it’s the law of God,” though he denied inferring that homosexuals should be put to death.

Like most of the boxer’s endorsement partners, Nike did not renew its partnership with the Pacman when it expired at the end of 2012.

After Pacquiao’s two straight wins in 2013, Nike went back to the table on the second half of 2014, and launched a line of hoodies and T-shirts in 2015 ahead of the Pacquiao-Floyd Mayweather Jr. bout.

Bello said the Bradley fight advertisements would give Pacquiao exposure that exceeded the allowed airtime of 120 minutes in every television station and 180 minutes in every radio station, as provided for by the new implementing rules and regulations of the Fair Elections Act.

The Commission on Elections (Comelec) said it would look into the possible violation of election rules should the Pacquiao-Bradley match pushes through in April, a full month before the May 9 polls.

Comelec Chair Andres Bautista said that even if election violations were determined, it would be better if complaints were filed against Pacquiao instead of the Comelec doing it on its own initiative.

“We might be faulted (and asked), why are we picking on him? We all know that he is a national figure and has brought pride and glory to the country,” Bautista explained.

“If Mr. Bello wants to file a case in the Comelec, he can do so. We can formally look into it,” he added.

A violation of campaign rules and regulations is tantamount to an election offense, which carries the penalty of one to six years imprisonment as well as disqualification from voting and holding public office.

Bello said the Comelec issued Resolution No. 9615 three years ago to expand the definition of  “political advertisement” to include media appearances in shows not covered by the Comelec hour.

This was the reason why television and radio anchors, as well as reporters and news columnists are required to resign  or take a leave of absence from their media-related jobs after filing their certificates of candidacy, Bello said.

He added that he himself took a leave as a newspaper online columnist in the months leading up to the 2013 elections “to comply with the law.”

A media officer in Pacquiao’s camp, who spoke on condition of anonymity for lack of authority to speak on the issue, said that as far as the Pacquiao camp was concerned, the possibility of disqualification was only Bello’s opinion.

The media officer added that Nike’s statement about not having a business relationship with Pacquiao was accurate, since its contract with the boxer had ended two years ago.

Jason Collins, the first openly gay athlete in the NBA, dismissed Pacquiao as “bigoted.”   He tweeted: “Bigoted people like you (& yes you are one) should never hold an office in politics.”

Popular Filipino gay comedian, Vice Ganda, urged his 6.7 million Twitter followers to “#PrayForMannyPacquiao.”   “Some people think they can judge people, like God, just because they’ve attended a prayer meeting and read the Bible,” he said.

“You might have done our country proud but with your statement, you just showed the whole country why we shouldn’t vote for you,” Seguerra said in a post on Instagram. With reports from AP and AFP