Palace: Marcos popularity not failure of Edsa, but revisionism in history 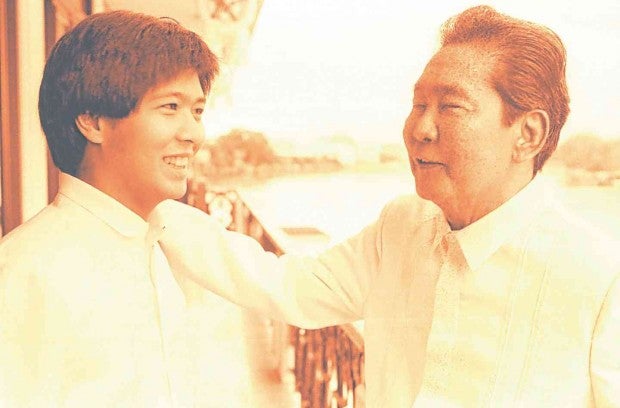 FATHER and son in the days
of the dictatorship. File photo

Days before the 30th anniversary of the historic Edsa People Power revolution, Malacañang on Wednesday said the popularity of vice presidential aspirant Sen. Ferdinand “Bongbong” Marcos Jr. in recent preference surveys was due to a “form of revisionism” in history.

“I’m not sure if you can call it a ‘failure of Edsa.’ There’s a strong attempt for revisionism. There has been a strong attempt to revise what happened prior to Edsa Revolution. In fact, our vice presidential candidate Leni Robredo has mentioned that people are portraying the Marcos years as the ‘golden years’—far from it,” Presidential Spokesman Edwin Lacierda told reporters in a press briefing.

The son and namesake of the late dictator was able to tie Sen. Francis Escudero at the top spot of the latest Social Weather Stations’ survey of vice presidential candidates. Robredo, the administration’s bet, trailed at far third.

Lacierda said the commemoration of the peaceful revolution’s 30th anniversary was a “good time to recall those years” and “cherish those freedoms.”
He added that the new generation “who never experienced human rights violation” should be reminded of the oppression and crimes of atrocities committed during the Martial Law as the “specter of dictatorship is coming back again.”

“Those who never experienced the dark days of Martial Law tend to not appreciate the same kind of disappointment over those years. We need to remind the people of… Maybe, perhaps, we need to remind people on a very regular basis,” Lacierda said.

“Now that the election is here, now that Senator Bongbong Marcos is here and the specter of dictatorship is coming back again, we certainly need to speak up against the dictatorship,” he added. TVJ

A walk through Edsa