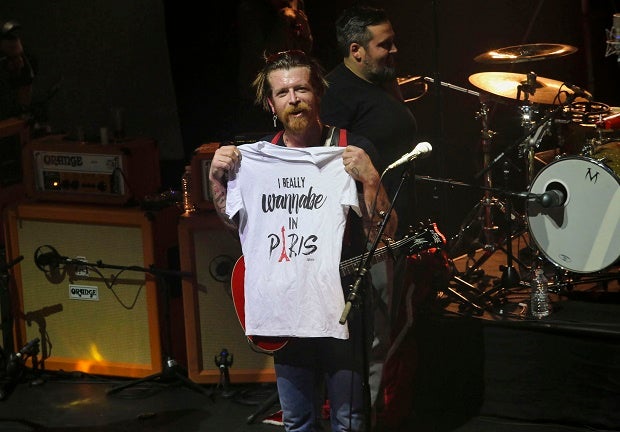 Frontman of California, USA, rock band Eagles of Death Metal, Jesse Hughes holds a T-shirt with slogan, “I really wanna’be in Paris” as the rock band performs Tuesday Feb. 16, 2016, at the Olympia concert hall in Paris, France. The band performed Tuesday at a highly charged Paris concert filled with fans who survived a terrifying massacre and siege at their last Paris show, and filled with memories of those who didn’t survive. The band’s performance on Nov. 13, 2015 at the Bataclan concert hall turned into a bloodbath when Islamic extremist suicide bombers stormed in, as near-simultaneous attacks hit cafes and a stadium around Paris. Le Parisien via AP

PARIS, France—Eagles of Death Metal frontman Jesse Hughes claimed Tuesday that if everyone had guns the Bataclan massacre may not have happened, as he returned to Paris to play in front of hundreds of survivors of November’s terror attacks.

The US band were playing at the Bataclan concert hall in the French capital on the fateful night in November when 90 fans were killed in a jihadist attack.

In a series of highly emotionally interviews, the American singer said France’s strict gun control laws “had nothing to do with” the attack. But he questioned whether gun control had saved any lives at the Bataclan.

“I think the only thing that stopped it was some of the bravest men that I’ve ever seen in my life charging head first into the face of death with their firearms.

“That night guns made them equal,” the 43-year-old told French TV station iTele. “Until nobody has guns everybody has to have them.”

Hughes—a member of America’s National Rifle Association—told AFP earlier: “I don’t go anywhere in America without a gun anymore. That sucks. And I’m not paranoid. I want to be prepared.”

But he lambasted US Republican candidate Donald Trump, for whom he has previously voiced support, for claiming he would have tried to fight off the attackers if he had a gun at the Bataclan.

Eagles resumed the world tour in Stockholm on Saturday that they halted after the Paris attacks.

The band members met around 60 survivors on Monday, the eve of the concert, and the group that represents some 500 of them, Life for Paris, said many would only decide whether to go or not at the very last minute.

Hughes vowed Tuesday’s gig would “be a regular rock show”, despite the area around Paris’ Olympia theatre being locked down by police, and a psychologist who has been treating the victims warning the concert could trigger panic.

“Rock and roll for me has always been fun and I am not going to let anyone take that away from me, or my friends,” he said, referring to the band’s fans.

He told AFP that he would love to “walk the line” outside the venue and greet the survivors as they arrived.

“The line outside must feel the same safety that we feel. I am tempted to walk that thing until it is gone,” he said. “We’ll see what they say.”

Hughes, who will be joined on stage by band co-founder and Queens of the Stone Age frontman Josh Homme, said he hoped the gig will be the first step to emotional recovery.

“I hope I can walk out on that stage and be stronger than I am being right now,” he told AFP tearfully.

“I don’t want to fall to pieces in front of everyone. This is therapy for me.”

Many of the survivors of the massacre at the Bataclan also see the concert as a form of catharsis “to end the nightmare” that began on the night of November 13, when 130 people were killed in coordinated shootings and suicide bombings across Paris.

Helene, who was in the front row when the killers burst in to the Bataclan, said she hoped seeing the band again would bring some closure. “It will allow me to finish” the concert, said the 42-year-old.

But others said they were still unsure whether to go or not.

Guillaume Munier, 29, who survived by hiding in a toilet, said: “I’m going to go to the Olympia, but I really don’t know if I’ll be able to go inside.”

Psychologist Carole Damiani, who leads a support group for the Bataclan victims, warned some people could panic if the situation is not handled correctly.

While some fans who were wounded are physically well enough to be in the audience, the mental scars were still painfully raw, she insisted.

“When one person is panicking it is one thing, but a collective panic is something else,” she said.

Going to the concert with “the same music and in a similar venue only three months later, they will be plunged into a similar sensory atmosphere,” which could trigger trauma, she warned.

A team of 30 volunteer counsellors and psychologists will be on hand in the theatre, she said, adding: “No one should kid themselves that this concert is going to cure them and put everything right.”