PARIS, France—A wave of coordinated attacks left more than 120 dead in scenes of carnage in Paris Friday, including scores massacred by attackers shouting “Allahu akbar” during a rock concert and others in a suicide bombing near the national stadium.

Black-clad gunmen wielding AK-47s stormed into the Bataclan concert hall in eastern Paris and fired calmly and methodically at hundreds of screaming concert-goers.

Police said at least 120 people were killed in total at multiple locations in the French capital, which is still reeling from jihadist attacks in January.

Witnesses said the attackers shouted “Allahu akbar” (“God is greatest”) and blamed France’s military intervention in Syria as they sprayed bullets into the crowd watching US rock band Eagles of Death Metal.

Four attackers were killed when police stormed the Bataclan, which lies just 200 metres (yards) from the former offices of Charlie Hebdo magazine that was targeted in January.

Three of the attackers blew up suicide vests as police launched their attack, several sources said. The fourth was hit by police fire and blew up as he fell.

“There was blood everywhere, corpses everywhere. We heard screaming. Everyone was trying to flee,” said Pierre Janaszak, a radio presenter who attended the concert and hid with several others at the venue.

“They had 20 hostages, and we could hear them talking with them,” said Janaszak.

In the north of the city, at least five people were killed in three explosions near the Stade de France national stadium where France were playing Germany in an international football match, security sources said.

One of the explosions was caused by a suicide bomber, police and witnesses said.

President Francois Hollande was attending the match and had to be hastily evacuated. 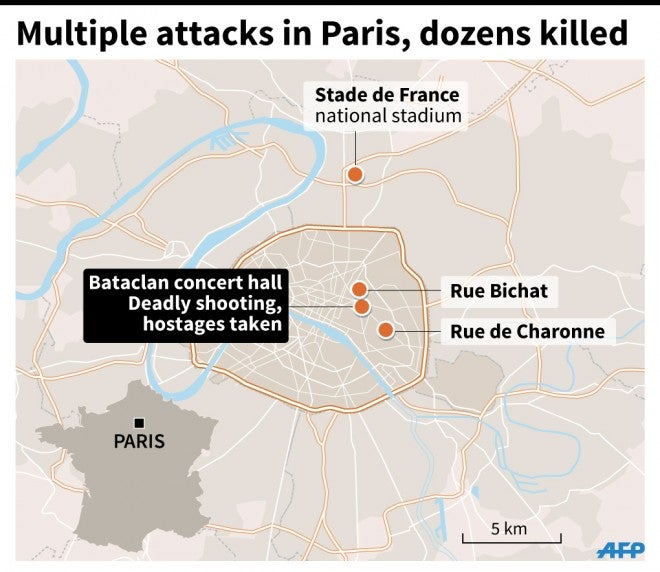 A Cambodian restaurant near the concert hall was also attacked, with further deaths reported.

“Terrorist attacks of an unprecedented level are underway across the Paris region,” Hollande said in an emotional televised message.

Hollande declared a state of emergency across the entire country and cancelled his trip to the G20 summit due to take place this weekend in Turkey.

Prosecutors said at least five attackers had been “neutralized” in total.

The most bloody of the attacks was at the Bataclan, where police said around 100 people were killed.

“We heard so many gunshots and the terrorists were very calm, very determined,” Julien Pearce, a reporter for France’s Europe 1 radio, told CNN while the hostage crisis was still underway.

“They reloaded three or four times … and they didn’t shout anything. They didn’t say anything.”

He said friends were still inside as he spoke.

“They are hiding in some kind of room in the dark and they text(ed) me, and they are very afraid, of course, and they are waiting for the police to intervene, but it’s been over two hours now and this is terrible.”

Hundreds of police had gathered outside and armed officers eventually stormed the venue at around 2335 GMT, accompanied by a series of explosions.

At the Stade de France, spectators flooded the pitch as news of the attacks spread before organizers started evacuations.

An extra 1,500 soldiers were mobilised to reinforce police in Paris, Hollande’s office said, while mayor Anne Hidalgo called for residents to stay home.

US President Barack Obama led a chorus of global condemnation, saying it was “an attack on all of humanity.”

France has been on high alert since the attacks in January against Charlie Hebdo and a Jewish supermarket that left 17 dead.

Security had begun to be stepped up ahead of key UN climate talks to be held just outside the French capital from November 30, with border checks restored from Friday.

More than 500 French fighters are thought to be with Islamic State in Syria and Iraq (ISIS), according to official figures, while 250 have returned and some 750 expressed a desire to go there.

France has joined US-led air strikes on ISIS targets in Iraq for over a year and in September began bombing the jihadists in Syria. 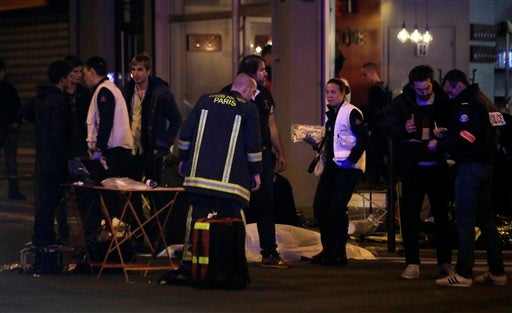 Rescue workers and medics work by victims in a Paris restaurant, Friday, Nov. 13, 2015. Police officials in France on Friday reported a shootout in a Paris restaurant and an explosion in a bar near a Paris stadium. It was unclear if the events were linked. (AP Photo/Thibault Camus)

On night of violence in Paris, France beats Germany 2-0

Read Next
Poe asks Comelec to defer decision
EDITORS' PICK
Palace: Duterte unfazed by ICC probe on drug war killings
Palace says ICC prosecutor report is ‘fantastical,’ based on ‘hearsay’
Smart brings KCON:TACT especially 4U to subscribers from June 19 to 27
Defending himself before ICC ‘logical thing to do’ for Duterte, says Drilon
Synology NAS: A photo storage and multimedia server for your home
Kai Sotto, Angelo Kouame lead Gilas final 12 vs South Korea
MOST READ
Opposition ‘must go beyond anti-Duterte platform’ in 2022 polls – Drilon
Duterte to meet with Sotto, Velasco to discuss fate of BARMM polls
Palace says ICC prosecutor report is ‘fantastical,’ based on ‘hearsay’
Sotto sees Sara, Pacquiao as ‘formidable competitors’ for president
Don't miss out on the latest news and information.