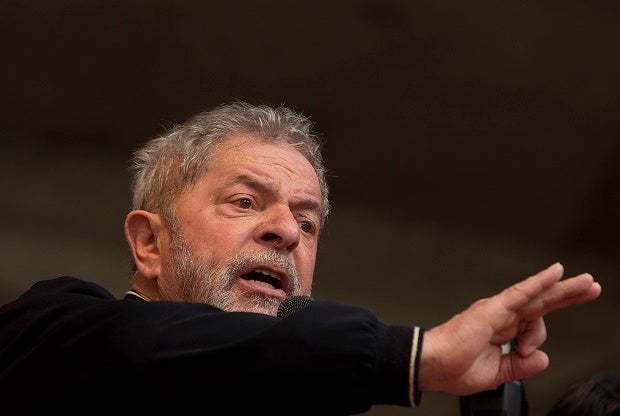 In this May 1, 2015, file photo, Brazil’s former President Luiz Inacio Lula da Silva delivers a speech during a May Day rally in Sao Paulo, Brazil. The prosecutor for the Brazilian state of Sao Paulo said Friday, Jan. 29, 2016, that the former President has been subpoenaed as part of an investigation into a suspected money laundering scheme involving an apartment Silva once thought of buying. AP File Photo

SAO PAULO, Brazil—Authorities in Brazil Tuesday called off testimony by popular ex-president Luiz Inacio Lula da Silva, who was to be questioned over allegations that he and his wife hid ownership of a luxury seaside flat.

The graft probe, which threatens the leftwing political giant’s potential bid to return to power in 2018, was set to have Lula testify in Sao Paulo on Wednesday.

But the National Prosecutors Council ordered the appearance called off, in a statement released by Lula’s Workers Party.

Reached by AFP, the prosecutors spokesman would not confirm that the hearing had been called off.

Lula has faced questioning in the matter before and has not been charged.

But this is the first time he would have appeared as a suspect in the probe into “money laundering, which includes the crime of hiding assets.”

The Council said its decision was made at the request of a Workers Party lawmaker who alleged procedural unfairness on the part of the prosecutor in the case, Cassio Conserino. Conserino told reporters there were apparently grounds on which to charge Lula at a time when the investigation had just begun collecting evidence.

Lula, 70, ended his two-term presidency at the end of 2010 with 80 percent popularity and his protege, Dilma Rousseff, winning the election to succeed him.

He oversaw Brazil’s economic boom, fueled by high oil and other commodity prices and massive demand from China. Lula was lauded at home and internationally for his social policies and use of the economic dividends to lift many of Brazil’s desperately poor into a middle class.

But Lula’s legacy has already been badly tarnished by a huge corruption scandal at state oil company Petrobras, where politicians, including high-ranking members of the Workers’ Party, took bribes in exchange for contracts.

At the heart of the case Wednesday is a luxury triplex apartment in the resort city of Guaruja in Sao Paulo state.

The property is registered to OAS, a firm linked to the Petrobras scandal, but prosecutors in Sao Paulo state suspect it is really owned by Lula. The apartment also allegedly underwent a $200,000 remodelling paid for by OAS.

According to the authorities, luxury apartments in the development like this one were being used by OAS as bribes.

Supporters hope Lula will come back in 2018 after Rousseff steps down at the end of her second term. But with the Workers’ Party discredited by the Petrobras scandal and Rousseff herself facing impeachment on separate allegations, the apartment allegations