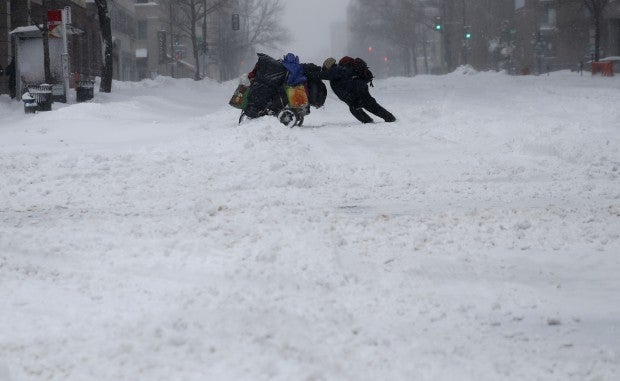 A homeless man pushes a cart with his belongings across 13th Street in downtown Washington, Saturday, Jan. 23, 2016. Millions of people awoke Saturday to heavy snow outside their doorsteps, strong winds that threatened to increase through the weekend, and largely empty roads as residents from the South to the Northeast heeded warnings to hunker down inside while a mammoth storm barreled across a large swath of the country. AP

BERLIN — Duesseldorf and Essen have joined several other German cities in calling off their main Carnival processions because of a forecast storm.

Strong winds are expected across a swathe of western Germany on Monday — including the Rhineland, the heartland of Germany’s annual street Carnivals.

The head of the Duesseldorf Carnival committee, Michael Laumen, told ARD television that organizers decided gale warnings made it “simply too dangerous” to go ahead with the annual Rose Monday parade. However, they plan to stage it later in the year.

Carnival organizers in Mainz, Muenster, Duisburg and elsewhere called off their parades on Sunday.

Cologne plans to go ahead with its parade but has banned horses, large puppets and flags from the event for safety reasons.