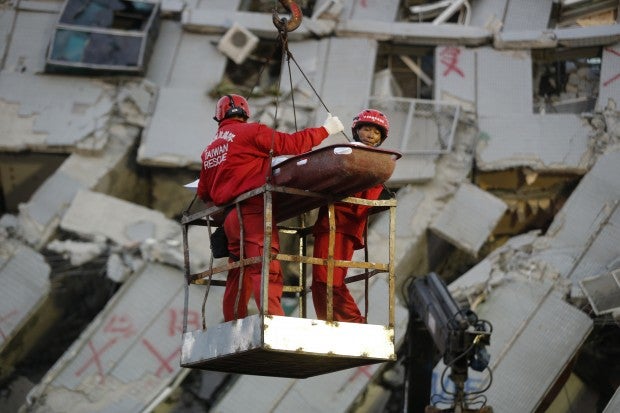 Two emergency workers carry a victim recovered from a collapsed building in Tainan, Taiwan, Sunday, Feb. 7, 2016. Rescuers on Sunday found signs of live within the remains of a high-rise residential building that collapsed in a powerful, shallow earthquake in southern Taiwan that killed over a dozen people and injured hundreds. AP

TAINAN — Two survivors were rescued Monday from the rubble of an apartment complex in Taiwan felled by an earthquake, after being trapped for more than 50 hours.

One man was lifted out by crane from the toppled Wei-kuan building in the southern city of Tainan, AFP reporters at the scene said. A woman had also been freed earlier according to rescuers.

The male survivor was named by officials as 40-year-old Lee Tsong-tian — rescuers had earlier told how they had been trying to dig him out of the rubble for more than 20 hours but were unable to do so as he was trapped by his leg.

Doctors had been sent in to assess whether removing his leg would help save him, but felt there was not enough room for the operation.

Tainan mayor William Lai said he talked to Lee just after he was rescued.

“I briefly chatted with him and he could communicate with his sister,” he said.

“But I’m afraid his left leg might need emergency treatment… it is not immediately clear whether he’ll be able to keep his leg, but doctors will do everything to treat him.”

Earlier Lai had told how doctors had climbed up to the rescue site to try to amputate Lee’s leg, “but that did not work”.

“Civil engineers advised us to dig him out from the bottom of the structure,” Lai said.

The woman survivor had been reached after rescuers heard her cries for help — but her husband and two-year-old child were pulled out dead, officials at the site said.

Emergency workers are searching for five other members of her family trapped inside.

There are still more than 100 residents buried in the rubble of the building which was toppled by a 6.4-magnitude quakeSaturday.

The quake left 37 confirmed dead, most of them from the apartment complex.