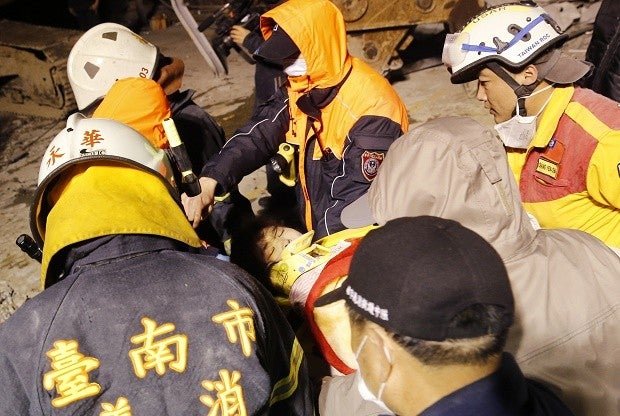 A woman is rescued from the rubble of a collapsed building complex from an early morning earthquake in Tainan, Taiwan, Saturday, Feb. 6, 2016. A powerful, shallow earthquake struck southern Taiwan before dawn Saturday. AP

TAINAN, Taiwan — Rescuers searched through the night Saturday hoping to free residents trapped in buildings toppled by a deadly earthquake in Taiwan, as survivors recalled being plucked to safety from their ruined homes.

More than 250 people have been rescued from the Wei-kuan apartment complex in the southern city of Tainan since the quake hit at 4:00 am Saturday, killing 14 people and toppling four blocks of around 100 homes in total.

READ: Over 100 missing, 14 dead as strong quake rattles Taiwan | Cebuano in Taiwan: ‘We ran for our lives’

Over 150 people remain out of contact with their families in Tainan and surrounding counties, with at least 20 feared still trapped in the rubble of the apartment buildings.

Those who escaped told of their terror and relief.

“(When the quake hit) I slid down from my bed and was trapped between the bed and a closet,” resident Su Yi-ming, 48, told AFP.

“I knocked on the closet to get the attention of rescuers who broke the window to get me at around 5:00 am. I think I was the first to be rescued,” he said.

“My mind went blank when the quake struck, it shook violently and the house just came down. I couldn’t react.”

Su escaped uninjured, with his wife and their two children sustaining minor injuries.

They lived on the sixth floor of one of the collapsed blocks.

“We are very lucky that we are alive but I’m sad that some of my neighbors lost their lives. When I was brought out I saw many rescuers trying to find people,” Su said.

Wang Chih-peng, 38, was rescued with his wife and three-year-old daughter.

“I was scared awake by the quake and I held my wife and child until it stopped shaking,” Wang told AFP.

“We lay on our bed waiting for rescuers because we thought it safer. I heard the sound of rescuers approaching and screamed for help and they removed the window to pull us out. I saw the building had tumbled and luckily we were safe.”

Footage released by emergency workers showed rescuers talking to one trapped 36-year-old woman through the rubble, where she had been pinned down by furniture for 16 hours, before digging her out.

Another woman was extracted alive from the ruins by crane late Saturday.