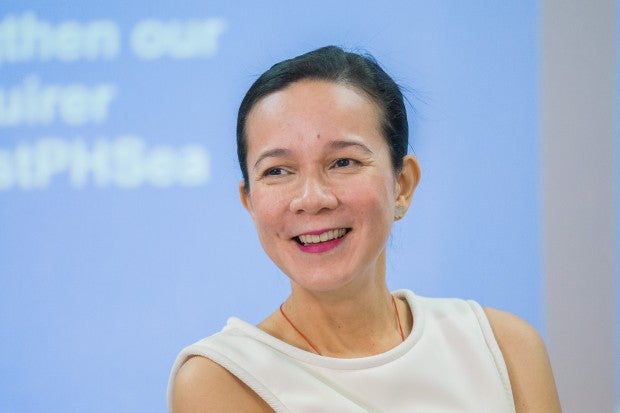 The race for Malacañang begins on Tuesday with Sen. Grace Poe at the head of the pack after regaining the lead in the latest Pulse Asia voter preference poll.

Vice President Jejomar Binay has dropped back to second place after a brief stint as leader at the height of voter uncertainty about Poe’s candidacy forced by legal challenges to her qualifications.

Poe is fighting in the Supreme Court to overturn the Commission on Elections (Comelec) decision to disqualify her from the presidential race on the grounds that she is not a native-born Filipino and that she does not meet the 10-year residency requirement for candidates.

The nationwide Pulse Asia survey taken from Jan. 24 to 28, the results of which were released on Saturday, showed Poe, was preferred by 30 percent of the 1,800 registered voters polled.

Compared with the December results, Poe’s latest score is 9 points up from 26 percent, buoyed by double-digit increases in Metro Manila, the rest of Luzon, Visayas and among Class D.

Binay, the leader in the December polls, had a voter support of 23 percent, a 10-point drop from his December score of 33 percent.

Roxas and Duterte, the combative mayor of Davao City, each scored 20 percent.

The poll had a margin of error of plus or minus 2 percentage points.

Voice of the people

Poe described the results of the poll as “overwhelming and humbling.”

“It echoes the voice of the people who trust and believe in my capacity to be a leader no matter what hurdles are thrown my way,” Poe said.

Binay’s camp shrugged off the poll, saying the candidates’ ratings were expected to fluctuate throughout the campaign.

“The Vice President has always maintained that the most important survey is on Election Day,” Rico Quicho, Binay’s spokesperson for political matters, said in a statement.

Marikina Rep. Romero Quimbo, spokesperson for Roxas’ campaign, said the results of the poll showed the fickleness of voters.

“The bright spot for [Roxas] is the fact that more than any candidate, he is the only one whose numbers have increased, slowly but surely,” Quimbo said.

“Roxas has no sudden dips or surges, unlike his rivals whose numbers have either increased or decreased from one month to the other by double digits. It shows that their support base is very weak, no permanency, unlike [Roxas’],” he said.

Compared with the December results, the scores of Roxas (from 17 percent) and Duterte (from 23 percent) recorded slight movements, while Santiago’s was unchanged.

“At this point, these numbers should be a message to the candidates that they should be able to distinguish themselves apart from the others,” said Edmund Tayao, political science professor at the University of Santo Tomas. “Voters can no longer be convinced by one-liners, or by simply looking good when in public.”

He said that with Roxas’ figures seemingly plateauing, in the end it may very well be a three-corner fight.

Given the margin of error, Tayao said Poe’s 7-point lead was not yet significant.

Across areas and classes

Poe’s ratings improved across regions, posting double-digit increases in Metro Manila (33 percent from 21 percent), the Visayas (26 percent from 15 percent) and the rest of Luzon (39 percent from 29 percent). In Mindanao, her rating rose to 16 percent (from 11 percent).

The rating of Roxas in the Visayas rose to 32 percent (from 27 percent), while in Mindanao it increased to 21 percent (from 13 percent). It was unchanged in Metro Manila (11 percent) and the rest of Luzon (16 percent).

Santiago’s ratings were unchanged in Metro Manila (6 percent from 10 percent), the rest of Luzon (4 percent from

Likewise, Santiago’s score was down among ABC (7 percent from 9 percent), D (4 percent from 5 percent) and E (1 percent from 2 percent). With reports from Tarra Quismundo, Leila B. Salaverria and Gil abacungan