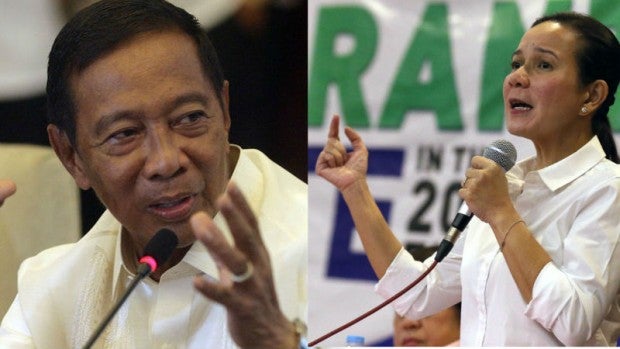 A DAY after a survey showed Vice President Jejomar Binay surging back to a hefty lead as the popular choice for President in the May balloting, another pollster said he was in a dead heat with the erstwhile leader he had overtaken, Sen. Grace Poe.

The SWS poll, published Wednesday in a business newspaper, showed Binay and Poe locked in voter preference, each garnering the nod of 26 percent of 1,200 registered voter respondents, who were asked whom they would vote as President had the elections been held during the survey period.

The Pulse Asia survey released on Tuesday had Binay on top with 33 percent, Duterte second with 23 percent, Poe third with 21 percent, Roxas fourth with 17 percent, and Santiago, 4 percent.

Poe was also the leading presidential candidate in the Sept. 2-5 SWS poll in which 26 percent also favored her. Binay was close with 24 percent, followed by Roxas (20 percent), Duterte (11 percent) and Santiago (2 percent).

In another special survey on Nov. 26-28, which was commissioned by Davao businessman William J. Lima, SWS found that Duterte was the leading candidate with 38 percent. Tied at second place were Poe and Binay with 21 percent each, followed by Roxas with 15 percent and Santiago with 4 percent.

This survey was widely criticized as “flawed” because of a “leading” question prefaced with Duterte becoming a presidential candidate.

The September, November and December SWS polls used face-to-face interviews with 1,200 respondents and had a margin of error of plus-or-minus 3 percentage points.

Asked to comment on the recent surveys, political science professor Edmund Tayao said that the marked difference in the results was “interesting.”

“If we are to compare these surveys, it is important to note the difference in the period of fieldwork and the way the questions were asked,” he said. “In previous elections, around this time we more or less already have an idea who the front-runner is.”

“It only goes to show that this is a tight race and the voters are still deciding,” Tayao said. “They can still change their minds in the next three to four months.”

“At this point, it is hard to call who will sustain the lead,” he added. “Changes are still happening, and there are still fluctuations. I’d like to think this is because the voters are still thinking—and they are thinking hard.”

“At this point, voters are only looking at the persona of the candidates. We are not hearing much about their programs and policies. Perhaps it is about time that the candidates elevate the level of political discourse for the sake of the voters,” he said.

Binay welcomed the newest SWS survey, saying it was a proof of the support of the people.

“The Vice President has exemplified that hard work and firm commitment to fight poverty will resonate well with the people,” Binay’s spokesperson Rico Quicho said in a statement. 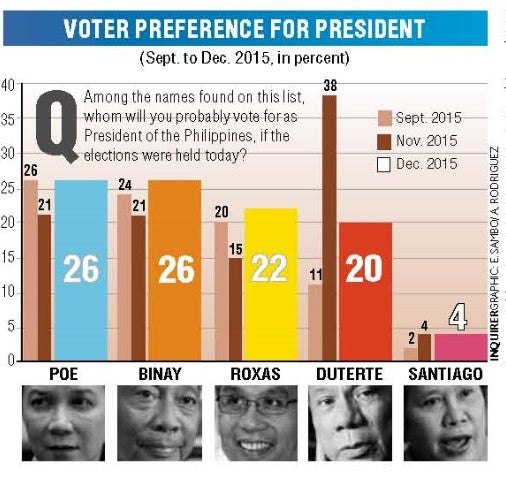 “From his 24-percent rating in September, the Vice President has improved to 26 percent to claim the top spot in the SWS survey. Vice President Binay sincerely thanks our people for continuing to support and pray for him,” Quicho said.

A lengthy investigation of plunder charges in the Senate by Palace allies against Binay and his family over the past year had eroded his ratings as a presidential front-runner.

“I accept with gratitude and humility the latest SWS survey results,” Poe said in a statement. “I will continue to make the rounds all over the country, reach out to the people on the ground and make known how the leadership we are offering would make the government genuinely work for them.”

“Nobody would be left behind in a government that has heart,” she said.

The surveys were conducted after two divisions of the Comelec decided to cancel Poe’s certificate of candidacy because she could not be considered a natural-born Filipino as a foundling, and she did not meet the 10-year residency requirement.

The disqualification cases, she said, created confusion among the people.

“The SWS survey is now out placing Rody Duterte at No. 4. Hahaha. The mayor got his Christmas wish to be placed at the bottom! And we don’t mind,” Peter Laviña, a Duterte spokesperson, said in a Facebook post.

Earlier this month after he topped the SWS survey conducted at Lima’s behest, the expletive-spouting Davao mayor said: “I will ask Pulse Asia and SWS to place me in the last (of their list), That is my request.”

Laviña said Duterte would now have to “work harder” and be “fully aware that the road to change is truly not easy.”

“There are tricks, twists and turns. However, never be afraid of the future. God is already there,” Duterte’s spokesperson said.

He said the SWS survey was taken when Duterte’s disqualification case was the biggest news in media.

After disposing of the case against Poe, the Commission on Elections should also rule with finality on the case of Duterte to end the confusion among voters, Nograles said.

The Roxas camp said the contrasting results in the major surveys this month showed that a majority of voters were still undecided.

Akbayan Rep. Barry Gutierrez, spokesperson of the daang matuwid, or “righteous path” coalition, said: “Several surveys released in the past week have produced different results. What is clear here is that a substantial number of Filipinos are still deciding which candidate to support and a lot can still change before May 2016.”

Gutierrez said Roxas was “encouraged” by the “consistently strong and steadily rising” number of Roxas voters in the surveys, specifically in the SWS survey where the LP ranked second behind Binay and Poe, who were tied in first place.

President Aquino’s spokesperson, Herminio Coloma, expressed hopes that the surveys would “serve to heighten the citizens’ awareness of the candidates … and lead to greater interest beyond personalities and into platforms of governance.” With reports from Niña Calleja, Leila B. Salaverria, Gil Cabacungan and Jerry E. Esplanada