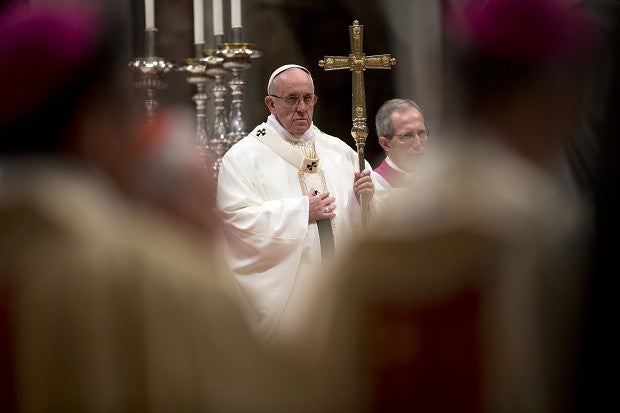 Pope Francis celebrates a mass for nuns and priest, in St.Peter’s Basilica, at the Vatican, Tuesday, Feb. 2, 2016. AP

VATICAN CITY — The Vatican is disputing a US film studio’s claim that the pope is making his movie debut, saying no scenes were shot for the venture and that the pope isn’t an actor.

Monsignor Dario Vigano, the head of the Vatican’s communications operation, acknowledged that he couldn’t exclude that the filmmakers got hold of some clips of the pope. But in comments broadcast on Vatican Radio on Tuesday, Vigano disputed the press release claiming that Francis would “play himself” in the film “Beyond the Sun.”

AMBI described the film as “a family adventure story where children from different cultures emulate the apostles while searching for Jesus in the world around them.”

AMBI Pictures has produced a handful of releases, including Barry Levinson’s “The Humbling,” with Al Pacino, and an upcoming John Steinbeck adaptation by James Franco. In November, it drew headlines when it said it would remake Christopher Nolan’s “Memento.”

The company said “Beyond the Sun” initiated with Francis asking the filmmakers to make a movie for children that communicates Jesus’s message. The press release was accompanied by photos of the pope with the filmmakers.

The Vatican works hard to control the pope’s image, enforcing tough copyright restrictions on all visual media, and Vigano’s reaction to the announcement was a clear sign that the Vatican didn’t appreciate the hype. But Francis has been known to go his own way on several occasions, allowing friends to shoot video of him to convey messages to private gatherings: He delivered such a message to the Argentine Jewish community and to a gathering of American Pentecostals.

Vigano’s comment that he couldn’t exclude that the filmmakers had some footage of the pope suggested that they might have secured some video of him in the privacy of his hotel reception rooms.

The organizers said all profits from the film will go to two Argentina-based charities that help at-risk children and young adults.