In age of apps, an exhibit of vintage toys 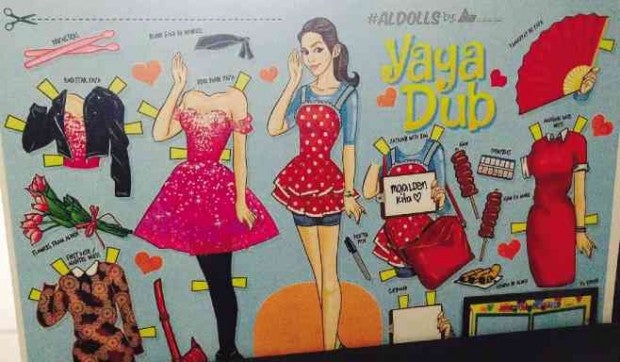 What toys did Filipino children play with before Angry Birds, Clash of Clans, Dota and so many other Internet-based games grabbed their attention and time in this age of apps?

The answers are visual treats now on display in an exhibit of antique and vintage toys that is mounted by the Holy Angel University’s Center for Kapampangan Studies in Angeles City.

All the featured items, dating from the 1900s to the 1990s, are the personal collection of Alex Castro, the university museum curator.

Castro believes the exhibit, called “Piyalungan (Children’s Toys of Yesteryears),” is the first of its kind in the country.

He gathered the toys for more than 30 years. The latest additions are AlDub paper dolls of television show sweethearts Alden Richards and Maine “Yaya Dub” Mendoza, complete with paper clothes, as drawn by Kenji Nuñez.

“Back then, it took very little to keep children occupied with hours of fun and enjoyment,” Castro says.

“With Piyalungan, it is hoped that in this age of technological wizardry, it is still possible for children to find fun and fulfillment with ‘simple toys that bring simple joys,’” he says.

“It is all about that age of simple innocence when toys cost little, had no complicated parts and required simple assembly. Just add children—and their imagination will take over,” he says.

He says he collected toys because he had very few playthings as a child. “My parents couldn’t afford to give toys to all their eight children. We mostly played with hand-me-down toys from our American tenants who gave us their used household items at the end of each year. I was fascinated with toys but I couldn’t have them,” he recalls.

Castro says he bought some of his collections from eBay. The toys on exhibit are what he calls “instruments of socialization, education and creative imagineering.” 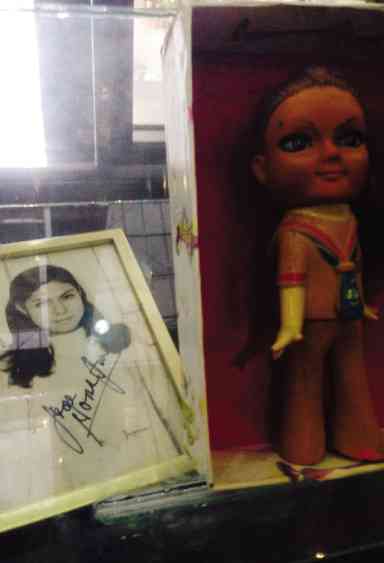 SUPERSTAR Nora Aunor spawned a toy doll in the 1970s.

Girls role-played as cooks through “kurang-kurangan” (clay stove and pots). “‘Teks’ (playing cards) brought out the competitive spirit of young boys in a nonphysical manner—as they tossed the cards in the air, swapped, traded and collected them,” Castro says.

The antique dolls in the exhibit are a China head doll (German made, 1905-1910), a metal head doll (made by Minerva Dolls in the United States), and a Russian doll (France, made of ceramic).

Contemporary celebrity dolls include those of Shirley Temple (a child superstar in the 1930), Filipino movie actress Nora Aunor (made in Japan, 1973-74), and Michael Jackson (made of vinyl, and dressed as the character in the 1984 MTV song “Thriller”).

There are paper masks from Filipino Komiks that were published by Ace Publications after World War II. A paper doll of “Rosing,” the sweetheart of Filipino comic character Kenkoy (both drawn by Tony Velasquez), is in the exhibit. She is said to be the first paper doll in the Philippines, as published in the Liwayway magazine in the 1930s.