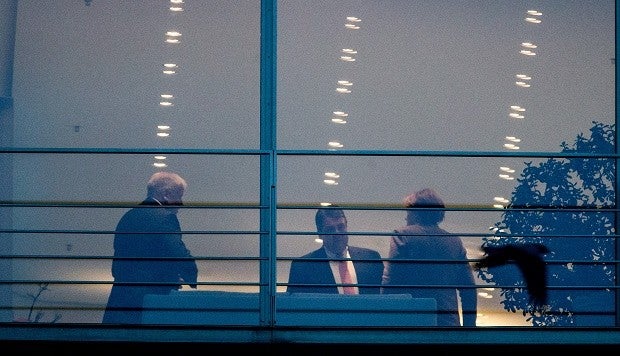 BERLIN — Germany’s governing coalition reached a deal Thursday to end prolonged squabbling over measures to streamline its handling of the migrant influx, a result that means some Syrians may face a longer wait to bring relatives to Germany.

The coalition also plans to declare Morocco, Algeria and Tunisia safe countries of origin, Gabriel said, making it easier to send migrants back to those countries. Germany did the same last year for several Balkan nations whose citizens are barely ever granted asylum.

The package of measures, which was first tentatively agreed in early November, also foresees using special centers to quickly progress migrants who have little realistic chance of winning asylum. It has been held up since then as Merkel’s and Seehofer’s conservative parties squabbled with Gabriel’s center-left Social Democrats over who should initially be blocked from bringing relatives to Germany.

The Social Democrats had taken the November agreement to mean that only a few people who receive “subsidiary protection” — a status that falls short of formal asylum — would face a two-year wait to be able to have relatives join them.

But the conservatives then argued that many Syrians — some of whom came to Germany from neighboring countries rather than directly from Syria — should get that status. Germany resumed closer checks of Syrians’ cases at the beginning of the year.

Germany registered nearly 1.1 million people as asylum-seekers last year, among them nearly 430,000 Syrians. It is keen to ensure that this year’s numbers are lower.

Gabriel said that about 20 percent of Syrians whose asylum applications have yet to be processed could be given “subsidiary protection” status, based on past experience.

But in future, still-to-be-negotiated quotas for bringing in refugees from Turkey, Lebanon and Jordan, family members of people already in Germany — including those granted that status — will be given priority, he added.

READ: Under pressure, Merkel looks to Turkey for help in migrant crisis

German officials also have long stressed the importance of making sure that migrants who don’t gain asylum leave the country. Merkel said later Thursday that Germany’s federal and state governments will discuss “how we can conduct returns better and faster.”

Merkel said her government will work “country by country” with migrants’ countries of origin to move the issue forward. “We want those with prospects of remaining to be integrated, but we also want to say that we need those who have no prospect of remaining to return,” she said.

Earlier this week, the Cabinet approved measures meant to make it easier to deport foreign criminals — a separate package that ministers drew up amid outrage over New Year’s Eve assaults in Cologne blamed largely on foreigners.

Read Next
US official says activity detected at North Korean launch site
EDITORS' PICK
Nestlé Philippines’ ‘NESCAFÉ Plan’ bags Grand Anvil at PRSP 56th Anvil Awards
Pope Francis to meet top cleric Sistani on second day in Iraq
Smart reinforces superiority with best speed and mobile video experience in PH
Don’t waste the hope of vaccines, warns WHO
Every Filipino home can now be a smart home with realme TechLife
822 NPA-free barangays set to get P20-M gov’t aid — Esperon
MOST READ
So: I lacked connections to succeed in PH ‘culture’
Robredo on Sara Duterte leading poll surveys: Why are Filipinos drawn to leadership of this kind?
US weapons, hardware in exchange for VFA
Jesuit lawyer, constitutionalist Fr. Joaquin Bernas dies at 88
Don't miss out on the latest news and information.