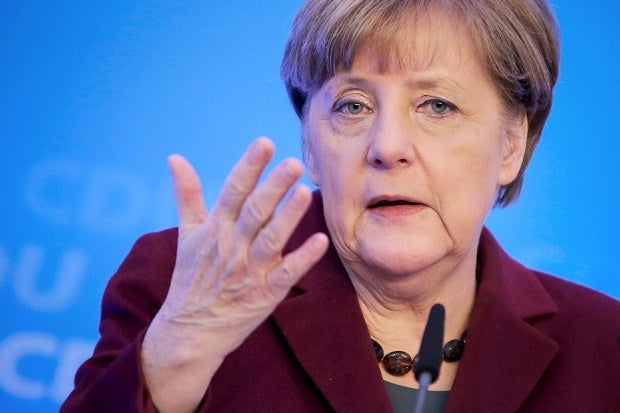 German chancellor and chairwoman of the Christian Democratic Party, CDU, Angela Merkel, speaks during a news conference at a party conference in Mainz. Germany, Saturday Jan. 9, 2016. Chancellor Angela Merkels party on Saturday proposed stricter laws regulating asylum seekers after a string of New Years Eve sexual assaults and robberies in Cologne blamed largely on foreigners. Merkel said the proposal, which will be discussed with her coalition partners and would need parliamentary approval, would help Germany deport serial offenders convicted of lesser crimes. dpa via AP

LEIPZIG, Germany—Thousands of far-right protesters rallied in the eastern German city of Leipzig Monday against the record refugee influx they blamed for sexual violence against women at New Year’s Eve festivities.

The crowd loudly vented its anger at Chancellor Angela Merkel, whom they accuse of destroying their homeland by allowing in 1.1 million asylum seekers last year.

“We are the people,” “Resistance!” and “Deport them!” chanted the followers of LEGIDA, the local chapter of xenophobic group PEGIDA, the “Patriotic Europeans Against the Islamisation of the Occident.”

A heavy police presence, with water canon at the ready, kept watch over the crowd of several thousand, and separated them from thousands of counter-demonstrators, as rain poured down.

While the rally stayed peaceful, police said some 250 far-right hooligans had thrown rocks and smashed shop windows in a traditionally left-wing student district of the city, before police dispersed them.

The key theme of the LEGIDA protest was the New Year’s Eve attacks in the western city of Cologne, where hundreds of women reported being groped and robbed by men described as Arabs and North Africans, in scenes that have shocked the country.

Justice Minister Heiko Maas earlier Monday warned that “those who now hound refugees—on the Internet or on the streets—have obviously just been waiting for the events of Cologne” and were now “shamelessly exploiting” the attacks.

“Refugees not welcome!” read one sign, showing a silhouette of three men armed with knives pursuing a woman, while another declared “Islam = terror.”

“Since New Year’s Eve, nothing is like it was,” said one speaker, PEGIDA activist Tatjana Festerling, who decried the night’s “sex jihad against women.”

“Asylum-Mummy Merkel had barely delivered her New Year’s address to the people when in Cologne the first fireworks hit the cathedral and police,” she said.

“Then these Muslim refugees started their wholesale terror attack against German women, against blonde, white women,” she said to loud boos from the crowd.

Waving a sign declaring “State of injustice,” 44-year-old demonstrator Lukas Richter said “Merkel is breaching the constitution and must go,” and that “the government must close the borders and return all illegal migrants.”

He charged that the New Year’s Eve attacks highlighted “the violence of foreigners in Germany that has existed for years.”

One sign mocked Merkel’s “We can do it” motto on the refugee influx, saying “You can’t even secure a train station.”