Under pressure, Merkel looks to Turkey for help in migrant crisis 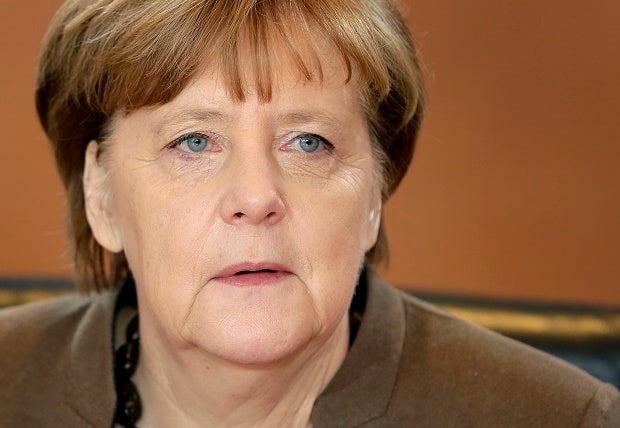 German Chancellor Angela Merkel looks on as she arrives for the weekly cabinet meeting at the Chancellery in Berlin, Germany, Wednesday, Jan. 20, 2016. AP Photo

BERLIN, Germany—German Chancellor Angela Merkel will press Turkey to step up to its “key role” in stemming the flow of migrants to Europe, when she hosts Prime Minister Ahmet Davutoglu for talks Friday.

Germany and Turkey have emerged as key players in the biggest migration crisis to rock Europe since World War II, and both parties will seek to drive a hard bargain at the talks between the two countries’ cabinets.

With the meeting coming on the heels of last week’s attack in Istanbul that killed 10 German tourists, discussions would also invariably focus on the international battle against the Islamic State of Iraq and Syria group, Merkel’s spokesman said.

READ: 9 of those killed in Istanbul attack were German

The outcome of Friday’s meeting is not only important for Merkel, who faces intense pressure at home to impose a cap on Germany’s refugee intake, but it will also have resonance across Europe where public opinion is hardening against a record asylum seeker influx.

Merkel has so far faced down domestic demands for a quota, after nearly 1.1 million asylum seekers arrived in Germany in 2015.

She has instead promised a “tangible reduction” in new arrivals, and is counting on international efforts to deliver.

Turkey plays a pivotal role as it is a launchpad for thousands of people making the dangerous sea journey on rubber boats to Europe.

“Stopping the refugee influx will be a topic at the government consultations,” Defense Minister Ursula von der Leyen confirmed Thursday during a visit to Turkey.

‘Not asking for money’

Merkel will ask Davutoglu to honor a deal with the EU to reduce the number of migrants coming through, as between 2,000 and 3,000 people are still arriving daily in Greece from Turkey despite the November 29 accord.

But the EU hasn’t delivered on the deal either, with member states still squabbling over how much each should pay in aid to help the 2.2 million Syrian refugees that Turkey is hosting.

Davutoglu Thursday said he would not even ask about the three billion euros ($3.2 billion) promised by the EU but will demand concrete action instead.

“We are not asking (for) money, we are not negotiating (for) money… For us, it’s a humanitarian duty, therefore the problem is not financial assistance,” Davutoglu told the Davos summit of business and political elites.

“We are asking for solidarity, we are asking to have a sense of common destiny,” he said on the eve of the Berlin talks.

“We will be discussing these with my dear colleague Merkel and we hope the next steps will be concrete steps to address this issue,” he added.

And both sides might point to a recent success in cooperation—major raids announced Wednesday by German and Turkish police which dismantled a criminal trafficking network that used unseaworthy ships to send more than 1,700 refugees to Europe.

Turkey has a special relationship with Germany as the EU’s biggest economy is not only home to around three million people with Turkish roots, but is also its biggest trading partner.

Friday’s talks are part of so-called government consultations—a format that Germany has with only a handful of countries, including India and China.

It will be the first such meeting with Turkey, and includes interior, foreign and defense ministers from both sides.

Merkel herself has said she will use the occasion to raise thorny topics such as media freedom and the situation of the Kurds.

Turkey is waging an all-out offensive against the separatist Kurdistan Workers’ Party (PKK), with military operations backed by curfews aimed at flushing out rebels from several southeastern urban centres.

But Kurdish activists say dozens of civilians have died as a result of excessive force and the operations have become the subject of huge controversy in Turkish society.

Concerns over press freedom are also rising in Turkey, after an increasing number of journalists were arrested or taken to court over charges of insulting or criticising top officials.

Under the banner “Not welcome, Mr Davutoglu,” Kurdish and some other Turkish groups in Germany are planning to march in protest to the chancellery, where the talks are due to begin at midday.