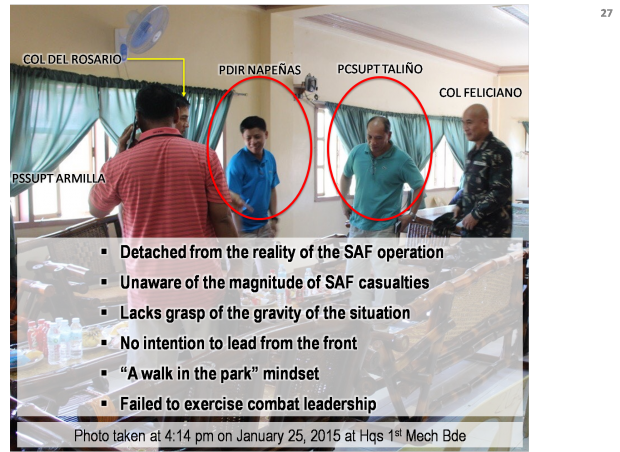 PHOTO COURTESY OF THE ARMED FORCES OF THE PHILIPPINES

The Armed Forces of the Philippines has shown to the Senate a photo of former Special Action Force Chief Getulio Napeñas and Deputy Director Noli Taliño smiling and looking at ease at the height of the gunfight between the SAF commandos and Moro rebels in Mamasapano, Maguindanao, a year ago.

A photo presented on Wednesday by Maj. Gen. Angelito de Leon, AFP deputy chief of staff for operations, showed Napeñas and Taliño seeming to be untroubled while their men were being pinned down in a cornfield around 4:14 p.m. of Jan. 25, 2015.

The AFP said the SAF leaders were “detached from the reality of the SAF operation and unaware of the magnitude of SAF casualties.”

They said the SAF commanders “lacked grasp of the gravity of the situation” and had “a walk in the park mindset.”

De Leon also pointed out that both Napeñas and Taliño were not in uniform, which meant they had “no intention to lead from the front.”

Another slide in the presentation of the AFP showed the same photo with the text: “Blamed everyone but himself,” referring to Napeñas.

Earlier, Napeñas recalled during the Senate probe on the Mamasapano tragedy that he had a tense moment with Maj. Gen. Edmundo Pangilinan, military’s 6th Infantry Division chief, after the latter refused to immediately send artillery support.

But Pangilinan said Napeñas gave inaccurate grid coordinates to the AFP, causing them to take some time to launch indirect fire.

The AFP was able to send artillery support only at 5:35 p.m.