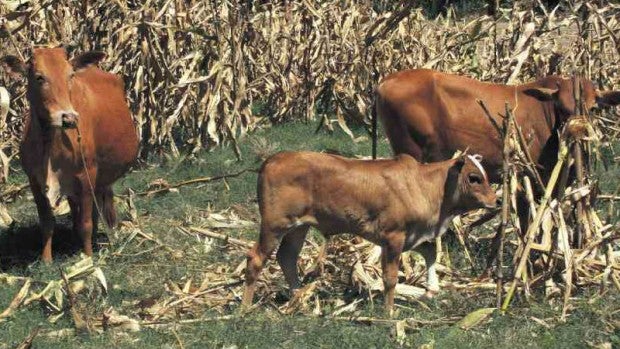 ALL QUIET NOW Cattle stand on a cornfield, one of the sites of last year’s bloody firefight between members of the Special Action Force and Moro fighters in Tukanalipao, Mamasapano town, Maguindanao province. JEOFFREY MAITEM/INQUIRER NORTHERN LUZON

On the eve of the reopening of the Senate inquiry into the Jan. 25, 2015 slaughter in Mamasapano, Maguindanao province, retired Chief Supt. Diosdado Valeroso told the Inquirer Tuesday he had not been invited to the hearing of Poe’s committee on peace and order and dangerous drugs.

Valeroso, 56, also said no one had requested a copy of the 15-minute audio recording, sent to him by e-mail, of a purported conversation between a legislator and a government official in connection with the Mamasapano incident.

“The recording clearly establishes a deliberate attempt to cover up the Mamasapano massacre,” said Valeroso, a candidate for senator in the May elections and a founding member of a military fraternity implicated in several coup attempts in the past.

“It shows in the recording that the peace process is more important than the lives of our troops,” he said.

Pressed for details, Valeroso replied: “It can be said there were attempts to downplay the Mamasapano massacre. Justice was not a priority. They panicked because their priority was the peace process.”

But Senate President Franklin Drilon said that whether in open session or behind closed doors, wiretapped recordings could not be played in the legislature without violating the law.

Poe, in a radio interview, said she would welcome anything that would help point people to the truth, though she noted that Valeroso himself said the recording had yet to be verified.

“If the recordings could not be made public, we could use it as a basis in an executive session. But definitely, I am not daunted by their threat saying this is illegal and can’t be used. I think we’ve heard that in Hello Garci before. This cannot be allowed just to hide the truth,” she said in a radio interview.

“Hello Garci” refers to a wiretapped conversation purportedly between then President Gloria Macapagal-Arroyo and an election official that indicated fraud in the 2004 presidential election.

But Drilon said that whether in executive session or not, wiretapped recordings could not be played in the Senate.

“The Senate is not above the law. The senators should abide by the law. What I am saying is that the law is so clear and precise that it leaves no room for misinterpretation,” Drilon said in a statement.

In March last year, 20 senators voted to approve Poe’s report on her committee’s hearing which said that President Aquino has a responsibility for the Mamasapano debacle.

Sen. Juan Ponce Enrile called for the reopening of the hearing, saying he had evidence showing that Mr. Aquino’s “failure of leadership” led to the slaughter of the SAF commandos.

Despite Valeroso’s going public about his possession of the supposed recording, Poe said no copy had been submitted to her committee. She said there had been no request made to her committee about its presentation.

Thus, the focus of the Mamasapano probe today would be “new information that may be presented by Senator Enrile as he is the proponent of the reopening,” she said Tuesday.

On Monday, she also pointed out that Valeroso himself said he would like to verify the audio recording first.

Enrile had said he had no plan to call Valeroso to the hearing. He said on Monday that those who have new information about the Mamasapano incident should voluntarily appear and submit their evidence to the Senate.

Enrile, who did not attend the earlier hearings of the committee because he was detained then on plunder charges, said earlier he would prove that the President knew extensively the police operation, had monitored it on that fateful day but did nothing to save the 44 troopers while they were being massacred.

He said the points he would raise today (Wednesday) had never been taken up by the committee. “The materials are in front of them but they did not understand the whole thing,” he said.

He said he was doing this “for the people, the poor guys who perished, the guys who are lucky enough to survive.”

“We are saying the truth will make us free. Well then, everybody must cooperate to unravel the truth. If they believe that or not just plain lip service. Let the hammer fall on anybody that is hit,” he said.

Sen. Antonio Trillanes IV Tuesday said he would seek the release to the public of the transcript of the committee’s executive sessions on Mamasapano. This will show that Mr. Aquino should not be held liable for the fiasco, he said. “You won’t think that President Aquino is liable. You won’t even consider that,” he said.

With the emotions now not running high, he said the committee can “dissect the issue and those circumstances objectively.”