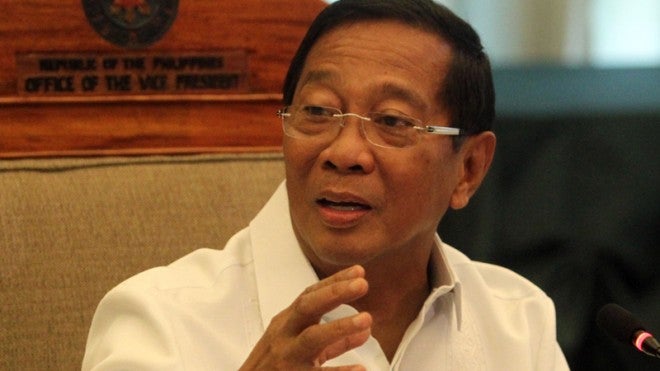 AT THE END of 25 Senate hearings that featured the testimonies of his former allies accusing him of corruption, Vice President Jejomar Binay remains a popular contender for President, but according to his critic, he is no longer the “political juggernaut” that he once was.

Sen. Antonio Trillanes IV, who initiated the blue ribbon subcommittee inquiry, also said the findings of the panel could be used to initiate an impeachment complaint against Binay should he win the presidency in the May elections.

Binay, after falling to second or third place at the height of the Senate hearings, is once again at the top of voter preference surveys for the presidency.

Trillanes said he was both happy and tired at the conclusion of the probe, which he insisted was primarily intended to look into anomalies and to come up with proposed legislation to improve how things are run in government.

“Let’s remember back in 2014, VP Binay was acting like a king in waiting because he was moving like a political juggernaut that couldn’t be stopped from becoming President. But right now, there’s no way he can be sure about it,” he told reporters after the hearing.

The subcommittee hearings began on Aug. 20, 2014, by looking into the alleged overpricing of the P2.28-billion Makati City Hall Building II, which began construction when the Vice President was still the city mayor.

With erstwhile Binay ally and former Makati Vice Mayor Ernesto Mercado as main witness, the panel later tackled more alleged anomalies, including Binay’s alleged receipt of kickbacks from infrastructure projects, use of dummies to hide ill-gotten wealth including a vast Batangas hacienda and deals supposedly putting the Boy Scouts of the Philippines—which the Vice President heads—at a disadvantage.

According to Trillanes, bringing down Binay’s numbers was not the inquiry’s main purpose. But the senator nevertheless believes Binay had been knocked down a peg or two and he continues to hope voters will reject him in the May elections.

Trillanes said Binay had been shown to have lied about his claim that he had answered the many allegations against him.

“Imagine if he becomes the President. He will hold a press conference and he will give garbage after garbage, lie after lie. That’s something we should ponder on,” the senator added.

Trillanes said he did not see the people electing Binay, but in case this happens, the findings of the subcommittee could be used to kick him out of office.

In case Binay wins, “the government will be unstable,” he said.

“All that had happened can be used as basis for impeachment proceedings.”

He believes a President could be impeached even for actions committed before his term, noting that impeachment is a political exercise.

“If a certain number of legislators agree, you can lose immunity. Then you can now be charged in court, after being removed from office,” he said.

During its last hearing Tuesday, the subcommittee recapped previous allegations against Binay. It also discussed the “2,300-percent” rise in his income over more than two decades and the transactions of the more than 200 bank accounts linked to him and his alleged dummies as reportedly found by the Anti-Money Laundering Council.

Renato Bondal, one of the Vice President’s critics, contended that based on Binay’s statements of assets, liabilities and net worth from 1988 to 2014, his net worth grew from

P2 million to P60.25 million while serving in government. Bondal said there was no job that offered such an exponential increase.

Bondal also quoted extensively from news stories, including those of Inquirer reporter Nancy Carvajal, that reported the findings of the Anti-Money Laundering Council (AMLC) on the bank transactions of Binay and his alleged dummies.

The Court of Appeals earlier issued a freeze order on their bank accounts.

Carvajal was invited to the hearing as a resource person. She attested to the authenticity of her source document in the report, and stood by the Inquirer computations of the P11 billion involved in the supposed bank transactions of Binay and his allies.

Carvajal noted that the AMLC had not disputed her report.

There were also supposedly massive withdrawals from their accounts after the Senate probe began.

Pimentel said the hearings had resulted in various proposals for new bills that aim to improve transactions in government.

Among the proposals were the mandatory video recording of all government procurement procedures and activities, and the enactment of a law providing for a presumption of overpricing in a government infrastructure project.

Pimentel also said that the hearings helped the Office of the Ombudsman to find probable cause to file graft charges against the Vice President, Mayor Binay and 22 others for alleged irregularities in the construction of the Makati City Hall Building II. Mayor Binay was also dismissed from public office.

He also said the subcommittee probe paved the way for the Bureau of Internal Revenue to file a tax evasion complaint against businessman Antonio Tiu, who was accused of being a front for Binay.

It led as well to the Department of Agrarian Reform looking into possible violations of the comprehensive agrarian reform law in relation to the Batangas estate being linked to the Binays.

Because of the hearings, the Boy Scouts of the Philippines was also paid long overdue rent from Alphaland, its partner in the questioned joint venture agreement, he added.

Mercado is not done yet spilling the beans against the Binays.

Mercado said he was willing to testify against the Vice President’s wife, former Makati Mayor Elenita Binay, in the Sandiganbayan after the antigraft court paved the way for him to appear as a witness in her trial.

“I am ready,” Mercado said.

He also said he had no worries about appearing in court.

“We will just tell the truth for the good of the country. We are sure of that,” he said in an ambush interview at the Senate.