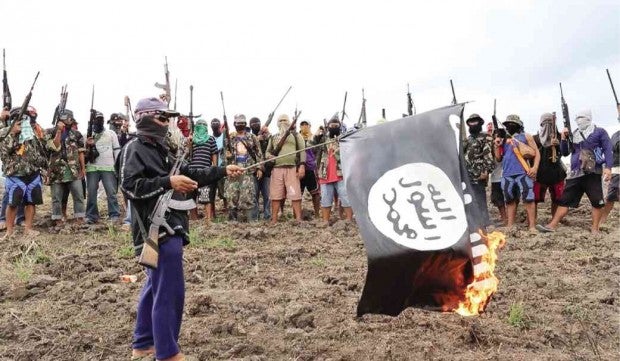 Members of an erstwhile unknown group calling itself “Red God Soldiers” burn a replica of an Isis flag on the day they announced their existence somewhere in Central Mindanao. JEOFFREY MAITEM/INQUIRER MINDANAO

COTABATO CITY—A group of renegade Moro guerrillas pointed to the military as the creator of a newly emerged Christian militia that has vowed to put up an armed resistance to guerrilla attacks.

The Bangsamoro Islamic Freedom Fighters (BIFF), through spokesperson Abu Misri Mama, said the BIFF believed that the so-called Red God Soldiers, composed of Christian settlers in Central Mindanao, was a tool of the armed forces.

Mama said based on photos of Red God members, the militiamen are carrying weapons supplied by the military.

A military spokesperson, however, shrugged of the allegation, saying soldiers are to take action against the militia once its hideout is known.

Mama said despite having apparently “sophisticated weapons,” Red God is not intimidating.

“There are only a few of them,” said Mama.

If BIFF is not intimidated by the military, which has far bigger firepower, what more Red God, said Mama.

“The military has tanks and yet we managed to sustain our campaign against soldiers,” he said.

A Red God leader, who identified himself only as Brother Asiong, said authorities are aware of the group’s existence.

Asiong, however, said Red God is not a military creation. He admitted, though, that the group had provided intelligence information to the Army.

Capt. Jo-ann Petinglay, spokesperson for the military’s 6th Division based in Maguindanao, said the military regards Asiong’s as another lawless group similar to the BIFF.

“If we learn of their location, they will be subjected to the law and will be arrested,” she said.

“If there is anyone from our ranks behind them, we will investigate,” she said.

“We will not tolerate this,” she added.

Maguindanao Gov. Esmael Mangudadatu said nobody is allowed to carry guns in the province unless authorized to do so.

“They could face arrest. Remember that a state of emergency is still in effect and we have the current gun ban,” said Mangudadatu, referring to Proclamation Order No. 1946, which then President Gloria Macapagal-Arroyo had issued following the Maguindanao massacre, and of the gun ban in relation to the May elections. Jeoffrey Maitem, Inquirer Mindanao

Read Next
Aquino assigns another classmate as acting DOJ secretary
EDITORS' PICK
Cebu City closes its borders
BREAKING: 1,075 people in PH has coronavirus disease – DOH
Style and music journeys with Claudia Barretto
DILG to stranded workers: ‘Stay where you are’ until Luzon-wide quarantine is over
UP-PGH wards for COVID-19 patients finished in 5 days
IATF: Food firms to operate with 50% of workforce during Luzon quarantine
MOST READ
Pacquiao to seek probe on leaked private letter from Barangay Dasmariñas
Tootsy Angara bares neighbor wanted them out of village
McCoy bares devastating effect of failed romance with Elisse
What awaits medical volunteers in DOH drive vs coronavirus
Don't miss out on the latest news and information.