US celebrities back ‘Dump Trump’ campaign 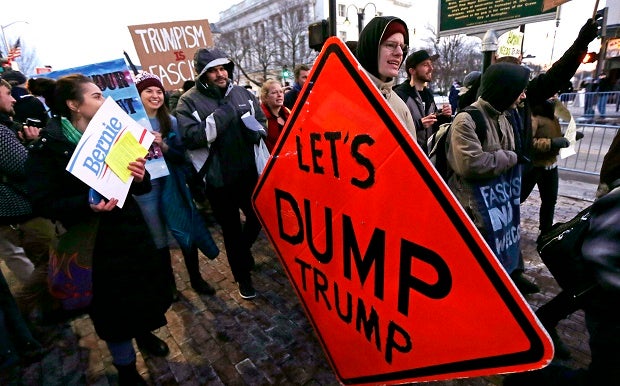 Johann Kulsic, of Burlington, Vt., holds a “Let’s Dump Trump” sign as he pickets outside the Flynn Center of the Performing Arts prior to an address by Republican presidential candidate Donald Trump at a campaign stop in Burlington, Vt, Thursday, Jan. 7, 2016. AP Photo

Actors Harry Belafonte, Kerry Washington and Jane Fonda, filmmaker Jonathan Demme and intellectual Noam Chomsky are among those lending their support to the drive to prevent Donald Trump getting into the White House.

“We are offering Americans a chance to be heard and engage in action, as Trump’s campaign gains momentum even as he increases his hateful and divisive rhetoric,” said playwright Eve Ensler, one of three cofounders.

“We also intend to put the media and political institutions on notice that they are accountable for normalizing Trump’s extremism by treating it as entertainment, by giving it inordinate and unequal air time and by refusing to investigate, interrogate or condemn it appropriately.”

Trump announced his bid for the White House last June, dominating the news cycle of the presidential race ever since with insults slamming Mexicans and illegal immigrants, and a call for a ban on Muslims entering the United States.

“We believe Trump is a grave threat to democracy, freedom, human rights, equality and the welfare of our country and all our people,” the campaign said.

“History has shown us what happens when people refuse to stand against hate-filled leaders. We pledge ourselves to speak out in every way possible against the politics of hate and exclusion he represents.”

Nearly 1,200 people had added their signatures to the campaign within hours of it going live on Wednesday.

Jodie Evans, a documentary film producer and cofounder of the anti-war organization Code Pink, said the initiative had arisen out of a conversation with Ensler and said the celebrity endorsements had come from their friends.

“The media is pushing the hate of Donald Trump like it’s a reality show,” she told AFP.