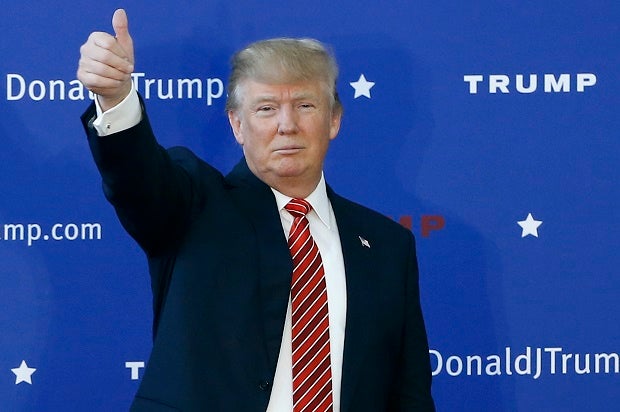 LYNCHBURG, United States—Donald Trump declared himself a defender of besieged Christians in a campaign speech to more than 11,000 people Monday, as the Republican presidential frontrunner openly courted the support of evangelicals two weeks away from first voting.

News that Trump, known more for womanizing, an extravagant lifestyle and bombastic rhetoric than piety, was to speak at the private Liberty University in Virginia had triggered threats of student protests.

But the 69-year-old billionaire and real-estate tycoon found a receptive audience at the university, an evangelical bastion and a rite of passage for conservative presidential candidates from Ronald Reagan in the 1980s to Ted Cruz, Trump’s main Republican rival.

Trump, who has courted a string of controversies and urged a ban on Muslims entering the United States, and Cruz are locked in a tight race in Iowa, which on February 1 becomes the first state to vote for party nominees.

Cruz, a Texas senator whose father is a Cuban-born evangelical preacher, already enjoys strong support from the evangelical community.

On Monday, it was Trump’s turn to secure the backing of the key voting block.

“We’ve done great with the evangelicals. The evangelicals have been amazing,” he told the crowd, to cheers, on what was a US holiday commemorating civil rights leader Martin Luther King.

“We’re going to protect Christianity. If you look what’s going on throughout the world—you look at Syria, where if you’re Christian, they’re chopping off heads.

“You look at the different places, and Christianity, it’s under siege.

Evangelical voters typically support candidates that are conservative on social issues, an area of weakness for Trump.

According to polls, nearly two-thirds of evangelical Republicans say a candidate’s position on abortion is the most important issue driving their voting decision.

But Trump, who during his political life has been a Democrat and an independent, is only a recent convert to the “pro-life” anti-abortion position prevalent among evangelical Christians.

In recent weeks Trump has stressed his own faith as he steps up efforts to reach out to this critical Republican voter group.