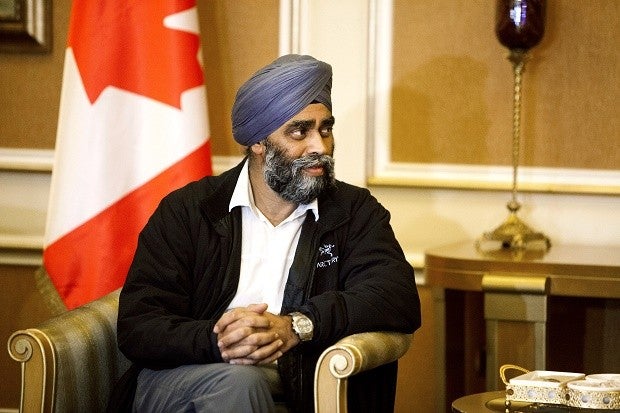 In a Sunday, Dec. 20, 2015 file photo, Harjit Sajjan, Canadian Defense Minister, is welcomed by Karim Sinjari, Interior Minister of the Kurdish Regional Government (KRG), not pictured, upon his arrival to Irbil, northern Iraq. Canada has been excluded from a meeting of defense ministers in Paris Wednesday, Jan. 20, 2016, to discuss the fight against Islamic State militants. Sajjan tried to suggest it wasn’t a big deal on Tuesday, saying this isn’t the only meeting. AP FILE PHOTO

TORONTO — Canada has been excluded from a meeting of defense ministers in Paris this week to discuss the fight against Islamic State militants.

US Defense Secretary Ash Carter didn’t mention Canada last week in a speech in Fort Campbell, Kentucky when he said he would meet defense ministers from nations who are playing a significant role in the coalition.

Defense Minister Harjit Sajjan tried to suggest it wasn’t a big deal on Tuesday, saying this isn’t the only meeting.

The US Defense Department issued a statement that said “the meeting in Paris this week is not a formal coalition meeting; rather, it is a one-time meeting of defense ministers.”

Carter previously said ministers from the Netherlands, France, Australia, Germany, Italy and the UK will take part in the talks Wednesday. The US has asked coalition members to boost their military contributions in Iraq and Syria against IS after the deadly terrorist attack in Paris in November.

But new Canadian Prime Minister Justin Trudeau has vowed to remove Canada’s six fighter jets from the mission. Trudeau has said allies understand Canada will step up military training: Canada has had 69 special forces soldiers in a training role in Northern Iraq with the Kurds. A Canadian soldier was killed by Kurdish fighters in a friendly-fire incident last year.

The Canadian mission includes six CF-18 fighter jets, a refueling tanker aircraft, two surveillance planes and one airlift aircraft, with about 600 airmen and airwomen based in Kuwait. The Canadian jets continue to participate in air strikes.

Australia has six jet fighters based in Dubai flying missions against Islamic State targets. It also has soldiers in non-combat roles in the Iraqi capital of Baghdad. The Netherlands has four fighter jets in the mission while Germany is not involved in air strikes.

Canada’s opposition Conservative party noted the previous Conservative government hosted an anti-ISIS coalition meeting last July. “Canada is deliberately being excluded because of this Liberal government’s decision to withdraw our CF-18s from the mission against ISIS,” the party said.