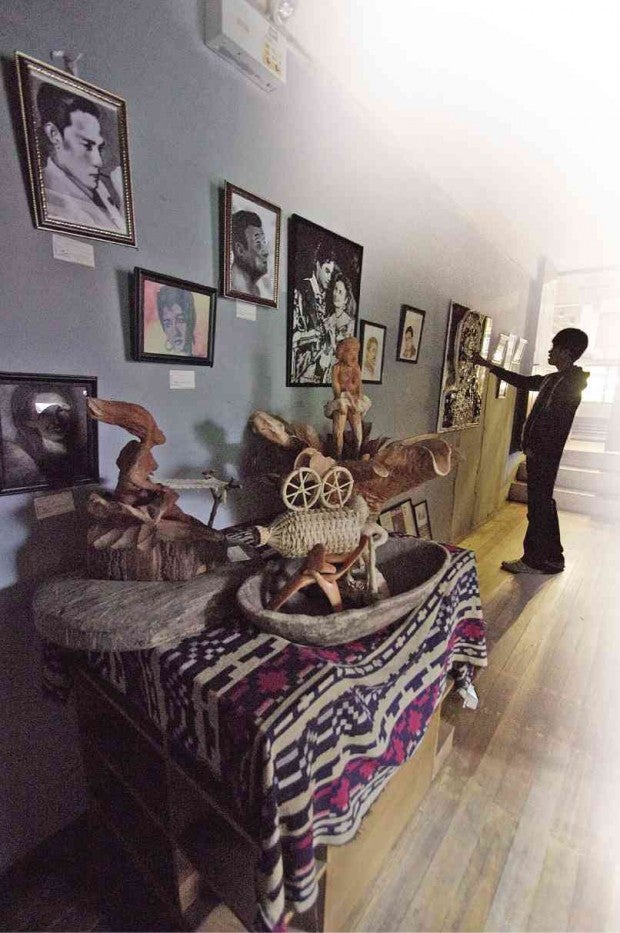 THE BAGUIO Cinematheque has put up an exhibit of Philippine movie memorabilia, from movie gadgets to posters of films shown as far back as 1960. RICHARD BALONGLONG / INQUIRER NORTHERN LUZON

The wall outside the Baguio Cinematheque has been bare for five years, but on Jan. 11, it came back to life with the touch of nostalgia and feel of the old cinema.

Old posters, pictures, memorabilia and artworks graced the once blank space as the cinematheque paid homage to Philippine cinema from the 1960s to 1990s.

While the exhibit tried to capture the spirit of the classic cinema, it was evident that it captured a younger set of crowd, mostly students who may not have seen some of the films of the period.

It also gathered young artists who tried to give value and interest to old films through their works. One of them, Joyce Ann Mallare, 30, did a paper cut and watercolor of the cult classic “Ang Babaeng Isputnik,” a 1963 film featuring Nida Blanca (in a title role), Tony Ferrer, Max Alvarado and Jess Lapid. Mallare’s work was inspired by the movie’s poster.

“I was surprised to find out that this film did not become as popular as Darna. The [60s] was also the era of superheroes whose leads were women. What I like about women superheroes was the message of women power and the courage that came with it,” she said.

Other artists did their interpretation of the old films from their own point of view and style.

Rommel Pidazo, who is known for junk art, came up with a textural portrait of “Asiong Salonga” embossed on chopped wood. He also paid tribute to Baguio-based filmmaker Kidlat Tahimik with his collage on mirror portrait titled “Tatay.”

Tahimik also exhibited his “Battle of the Two Goddesses of the Wind,” an installation of wood carvings that had been brought to various film festivals. The work features three characters: Inhabian (the Ifugao goddess of the wind), who is pitted against Hollywood star and icon Marilyn Monroe (the “Goddess of Hollywood”), and a native filmmaker who is holding a bamboo camera.

“This work is about fighting for the attention of the filmmaker. Local stories should be captured in film rather than the blockbusters.” Tahimik said.

“The real situation is new filmmakers are attracted to profit but we have to keep on fighting for the alternative filmmaker who will capture the local point of view.”

Local point of view was present in the exhibit. One of the old works was the 1984 poster of Cinema Direct, a workshop facilitated by the University of the Philippines Film Center at UP Baguio. The workshop gathered local artists and Baguio residents to study the basics of filmmaking using local stories and settings.

“The idea of the workshop was for the participants to understand the culture of the place and its people, whether they are locals or migrants. The workshops ran for three months to give time for research and documentation. The workshop had helped participants document locales and people,” said Ernie Enrique, a facilitator and lecturer of Cinema Direct.

“This is just the start of the activities here, we want to promote culture and cinema in the Cordillera,” said Mickey Zarate, marketing officer of Baguio Cinematheque.