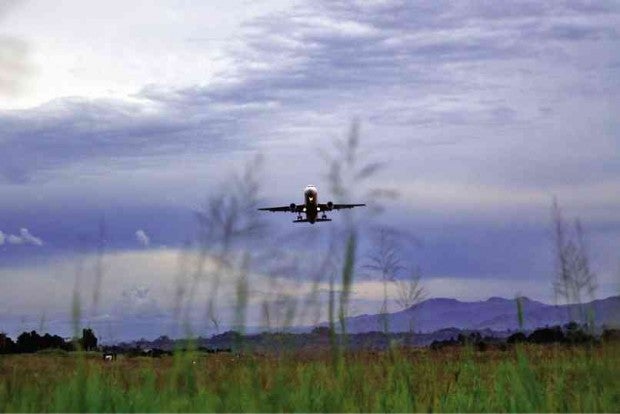 A COMMERCIAL plane takes off from the Lumbia Airport for the last time in 2013 as the airport was decommissioned and was turned into the new home of the Philippine Air Force in Cagayan de Oro City. BOBBY LAGSA/INQUIRER MINDANAO

CAGAYAN DE ORO CITY—The mention of a decommissioned airport in the city as a possible camp for American military forces is bringing to the local level a national issue and raising a question that could mean smooth or rough sailing for the plan to house US soldiers and war materiel—would it benefit the city?

The opposition-dominated city council would convene to take a unified stand on the proposed use of the Lumbia Airport, which has been decommissioned for civilian use recently, as a base for US military forces, according to a member of the council.

Councilor Teodulfo Lao said the council would discuss whether the use of Lumbia, under the Enhanced Defense Cooperation Agreement (Edca), would benefit or harm the people of the city.

The Supreme Court recently ruled Edca to be constitutional, sparking protests from legislators and leftist groups.

Councilor Lao said he personally did not understand why the city had to be included in areas offered to American forces when it was not strategic in terms of defending Philippine territory in the West Philippine Sea from Chinese aggression.

“They said it was in preparation for the security and stability of West Philippine Sea but we are far from there,” Lao said.

He said allowing American soldiers to use Lumbia could have negative effects, like the spread of prostitution.

On the other hand, he said, American military presence in the city could also be a magnet for investors.

Councilor Lourdes Darimbang said that this early, she was taking a position against the plan to house US soldiers in Lumbia because it could increase security threats in the city.

Mayor Oscar Moreno said he saw no problem if the city allowed US military forces to use Lumbia, which is now the home of the Philippine Air Force’s 15th Strike Wing.

The mayor said the long-term benefit of the use of the old airport as a US base should be considered.

Lactao said that aside from economic gain, the presence of US forces in the city would also enhance security.

He said more economic activity was likely to be generated if the country and its territorial waters were secure.

It could mean more foreign ships docking at the city port to refuel and replenish supply. Tourists on board these ships could also stir economic activity in the city, Lactao said.

The League of Filipino Students (LFS), however, said the presence of US forces in the city and elsewhere in the country could lead to further abuses and acts of violence against Filipinos.

“The fact remains that the presence of US military bases in the country brings along cases of human rights violations,” LFS Northern Mindanao said in a statement. With a report from  Jigger Jerusalem, Inquirer Mindanao

Read Next
PNP says it continues to provide assistance to families of SAF 44
EDITORS' PICK
Being a celebrity isn’t wholly an ‘advantage’ in the election, says Sotto
Acer starts the year off strong with the Aspire Vero National Geographic Edition
Octogenarian jailed for ‘stealing mangoes’ freed after people chip in for bail
Gov’t eyeing COVID-19 tests in pharmacies
Gear up and get ready to play with Yamaha Mio Gear
Over 3 Million worth of prizes to be won at Smart Padala’s SENDali Manalo Promo!
MOST READ
Natural immunity more potent than vaccines during US Delta wave—study
Mocha Uson, Michele Gumabao draw flak for running under party-list representing mothers
Bongbong Marcos-Sara Duterte tandem adds Zubiri, Gadon, Marcoleta to Senate slate
Help pours in for octogenarian jailed for ‘stealing’ mangoes in Pangasinan
Don't miss out on the latest news and information.