Glimpses of the past in Camalig houses | Inquirer News

Glimpses of the past in Camalig houses 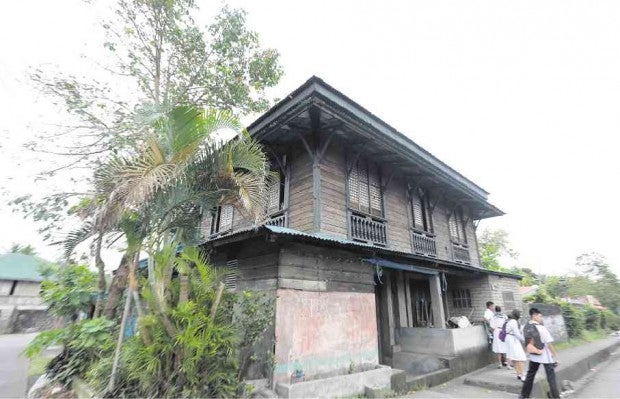 HIDDEN TREASURE The local government of Camalig, Albay, considers turn-of-the-century houses, like this one in the town center, as the province’s “treasures and assets.” MARK ALVIC ESPLANA

IN CAMALIG, a quiet town 15 kilometers from Albay’s provincial capital of Legazpi City, 11 houses, mostly about a hundred years old, have withstood wars and storms, and have become as much a source of local pride as the popular pinangat (taro leaves stewed in coconut milk).

To officials of the third-class municipality (annual income: P35 million-P45 million), Camalig is more than the home of the pinangat. It is a place rich in history showcased by its 11-century-old-or-so houses through free “heritage walks” and tours, especially for students on educational tours.

Mayor Carlos Irwin Baldo and other members of the municipal council are strongly pushing the National Historical Commission of the Philippines (NHCP) to declare the Camalig ancestral homes as heritage houses. The NHCP, however, said no after a visit in April last year, pointing out that the houses have no historical significance or were seats or abodes of prominent historical figures, or were built by renowned artists or architects.

Without the NHCP approval, the municipal government instead installed markers that declared them Albay’s “assets and treasures.” The provincial government led by Gov. Joey Salceda even went on to officially declare Camalig a “heritage town” and placed it front and center in Albay’s tourism promotion activities.

But tourism is just a byproduct. The local government wants to keep the structures upright in the coming years as symbols of Camalig’s storied cultural past, municipal tourism officer Jed Villanueva says.

“These antique and colonial houses were built in the 18th and 19th centuries. They were there during the Spanish and American occupations. So you can imagine the significant roles they played in the town’s history,” he says.

The local government intends to hire technical experts who can recommend ways to preserve or renovate the structures. Each house will receive between P50,000 and P100,000 for immediate repairs.

While the NHCP might not have appraised much of the Camalig houses’ historical value, research by the provincial historical and cultural unit shows that these were owned by the town’s leading political figures. The houses had also been occupied by ranking military officials during the Japanese occupation in the early 1940s.

Gen. Tomoyuki Yamashita, who led the Japanese forces in the Philippines, was rumored to have stayed in one of the houses during their foray into Bicol. However, this was simply a story passed on from person to person, without any solid evidence to back it up, Villanueva says.

One particular house, which belongs to the Moyo family, is “a silent witness to the ravages of war,” he says. Located in Barangay 7 at the town center, it is now home to a retired police officer, Jamie Moyo, 57, a descendant of the original owner.

A structure that is getting more attention is another Moyo ancestral house. Though it was built only in 1932, it is considered the prettiest of them all. A striking feature is its exterior design, marked and decorated by wooden panels called bandejado and windows made of capiz shells.

The house was originally owned by Barbara Nieves Moyo and inherited by her son, Teodoro. After Teodoro’s death, the house was left to his widow, Melba Grajeda Moyo. It was home to Melba’s daughter, Melinda, who had remained unmarried until her death in September last year at 69 years old due to a heart ailment, Villanueva says.

In February last year, Melinda had told the Inquirer about how much she appreciated efforts of the local government to preserve her ancestors’ house.

To her, it was the only home she knew and which sheltered her from the many strong typhoons that pounded Albay through the years. It has defied the storms because the family used quality materials in building it.

Melinda had also spoken about the many times she would welcome students to her house, many of them taking photographs while marveling at its architecture.

The Nuyda house, also in Barangay 7, is just 100 meters away from the municipal hall. It is built in the geometric style of the bahay na bato (stone house) and can be accessed through a uniquely designed stone porch. It is also an exemplary showcase of diamond-patterned concha (shell-pane sliding widow), a design said to have originated from Bicol.

The late Justino Nuyda, a renowned poet who served as representative of Albay’s second district, once lived in this house.

Another bahay na bato in the area is the Anson house, originally owned by Toribia Iglesia Moya, sister of the town’s capitan municipal (mayor) Doroteo Iglesia Moya Jr. during the Spanish colonial period.

Toribia’s son, Anacleto Moya Solano, was the last capitan municipal of Camalig (1897-1900) and also its first presidente municipal (1901-1902) under the American colonial regime. His descendants are members of the Anson and Valeciano clans.

The house was in the name of the Ansons during the American period, was transferred to the Valeciano family in 1920, and returned to the Ansons in 1980.

One of its striking features is the main outdoor staircase that leads to the living room and azotea (terrace roof). Some areas were once used for quarters of the guardia civil (civil guards) during the Spanish period, according to the provincial historical research data.

Another century-old house is the Samson home in Barangay 5. It was damaged during the early stages of World War II but has since been repaired. Built at the turn of the century, it was restored in 2011.

The Navera house, which was put up in 1897, was also damaged during the war, when Japanese planes conducted air strikes. It has since been restored and is occupied by a family descendant, Nilo Navera, of Barangay Ilawod.

Expedito Francisco, 87, who grew up in Camalig, has been walking on the same streets where these houses once stood in full splendor. “I’m quite amazed that the remnants of (my) historical past are still preserved. I hope (they) will stay strong and defiant in the coming days,” he says.