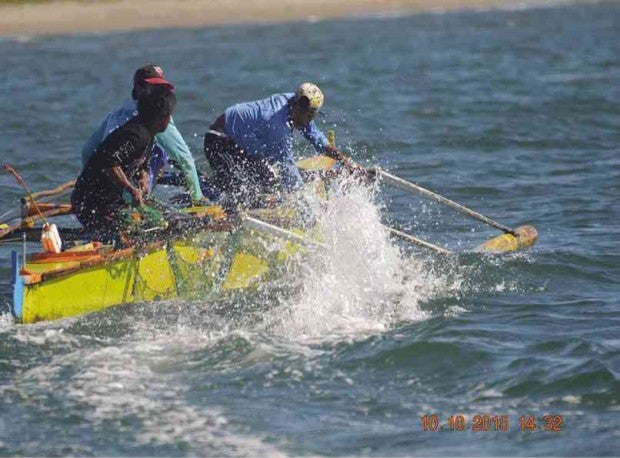 FISHERMEN suspected to be using improvised dynamites are caught in the act of retrieving their catch by the fishery law enforcers of the Bureau of Fisheries and Aquatic Resources in the Lingayen Gulf. CONTRIBUTED PHOTO

LINGAYEN, Pangasinan—Whenever Elino Victorio sees something floating in the Lingayen Gulf, he gets curious.

A piece of Styrofoam wrapped with bright colored plastic bags or debris carrying a small flag may not be as innocent as they look, he said.

These floaters are often used as markers indicating the location of fish nets containing the day’s haul caught in blasts when illegal fishermen ignite improvised explosives.

Victorio, 26, is a fishery regulation officer of the Bureau of Fisheries and Aquatic Resources (BFAR) in the Ilocos region, who mans one of the six BFAR boats sent out each day to prevent blast fishing in the gulf waters off La Union province.

But Victorio and his fellow marine patrollers are new to the job. They were assigned to monitor the gulf in July last year, after a three-month training on fishery law enforcement.

“After blasting an area in the gulf, the fishermen would collect the fish in a net which they hide under the water. The net is connected to a sinker, usually a heavy steel bar. Then they mark the area with a buoy or a floater,” he said.

“When the coast is clear, or when the patrol boats are far from the  scene, the fishermen would retrieve the fish and their gear.”

The markings suggest that the illegal fishermen follow a code, he said, because no one but the owners would reclaim their haul.

Hannah Juguilon, another fishery regulatory officer, said guarding the gulf against illegal fishermen “is like playing hide and seek.”

‘Here they are again!’

“We hear side comments like, ‘Here they are again!’ when we are around the coastal waters,” she said.

Juguilon, 22, a fishery course graduate, has only been on the job for six months. But she has experienced the inherent difficulties of protecting the marine environment.

Once in Lingayen town, Juguilon recalled, the head of the fishery and aquatic resources management council (FARMC) informed the agency about blast fishing in the area.

“Sadly, when we reached the place, the fishermen had fled, leaving behind two boats with nets, makeshift buoys and steel bars,” she said.

The BFAR patrol confiscated the vessels, which were placed under the custody of FARMC head Rudy Aldre, while the agency drew up a complaint of illegal fishing against the boats’ owners.

A government prosecutor ordered the boats released to the owners, believing their story that the boats were stolen and used for illegal fishing, Juguilon said.

“But it turned out that the seven suspected thieves they identified to the prosecutor were all dead,” she said, adding that BFAR intended to sue the boat owners for perjury and for obstruction of justice.

But none of the BFAR patrollers has seen blast fishing at sea.

“We just [assume] they have done something illegal because when we approach the boat, they sail off as fast as they could, abandoning their fish and their fishing gear,” Victorio said.

“One time, while we were explaining the law prohibiting illegal, unreported and unregulated fishing to some fishermen, somebody unloaded several kilos of fish into our boat. We returned the fish, explaining why we could not accept the ‘gift,’” Juguilon said.

The team also deals with crafty fishermen who try to beat the law by avoiding markets where fish examiners can detect traces of blast fishing when they check fish on display.

Knowing how the illegal fishermen elude the law is half the battle won, he said.