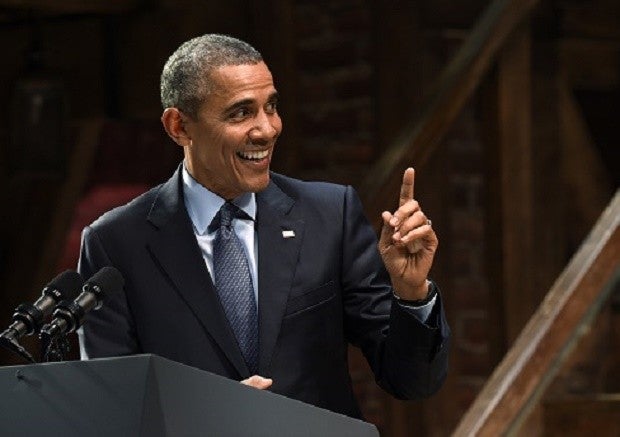 President Barack Obama speaks at the Richard Rodgers Theatre in New York, on Nov. 2, 2015, at a Democratic National Committee fundraiser. The American president is expected to deliver his last State of the Union Address on Tuesday, Jan. 12, 2016, (Wednesday, Jan. 13, in Manila) on an optimistic note. AP

WASHINGTON, United States — Barack Obama will use his final State of the Union address Tuesday, one of the last grandstand occasions of his presidency, to define his legacy and make the case for optimism amid an angst-ridden election race.

Seven years ago, a youthful President Obama’s first address to Congress surprised some with gloomy talk of shaken confidence, a weakened economy and uncertain times ahead.

His farewell State of the Union address may surprise for its optimism.

Senior White House officials promise an unorthodox speech. Obama will ditch the traditional hour-long laundry list of the year’s legislative priorities and instead look beyond his presidency.

For a president who has leaned heavily — critics say too heavily — on dazzling rhetorical skills to push his agenda, it will be one of the last chances to define his presidency before a national audience.

Around 30 million viewers are expected to watch live, an audience that may only be matched during the Democratic nominating convention later this year, when he passes the torch to the next presidential hopeful.

To reach the broadest audience, Obama’s aides will amplify his message across print, television and innovative digital platforms like Medium and Genius.

Obama will list his administration’s achievements, from healthcare reform to gay rights to a nuclear deal with Iran to a pending trans-Pacific trade deal.

But he will also stress the distance traveled since the throes of the Great Recession and speak to a present he will portray as rich in promise.

“It’s about the power of possibility,” said a senior White House official. “It’s looking beyond his time in office,” in an attempt to “elevate the country.”

The speech, under construction since the autumn, will also challenge Americans to address unfinished business, from dealing with racial tensions to gun violence to drug abuse.

White House officials admit it is a risky strategy.

For a president with a year left in the Oval Office, misjudging the nation’s mood could make him look cripplingly out of touch.

The political backdrop is a shrill and hyper-partisan 2016 election campaign that has tapped into fears about terrorism, as well as middle-class malaise spurred by a lost decade of wage growth.

Obama is unlikely to dwell on the 2016 election race directly, but in embracing optimism, the White House hopes to draw a sharp contrast with Republicans.

“We think that there is a lot of noise coming from one party,” said one aide,  insisting the negativity of the campaign trail does not represent the broader nation.

If Obama manages to kindle a sense of optimism, supporters hope it could help define a political epoch, much as Lyndon Johnson did when declaring a “war on poverty” or when John F. Kennedy announced the moonshot.

Obama has long thought of his presidency in such historic terms. But the broad sweep of his speech is also born of necessity.

He faces a hostile Republican Congress, united only in its disdain for him and his agenda.

Obama can expect some bipartisan support for a call to enact criminal justice reform, but efforts to close the notorious prison at Guantanamo Bay or improve ties with Cuba will require unilateral executive action.

He will rely on symbolism and the bully pulpit to press for tighter gun-control laws, which Republicans fiercely oppose.

The White House says one seat in the First Lady’s guest box will be left vacant for “victims of gun violence who no longer have a voice – because they need the rest of us to speak for them.”

Republican criticism is likely to focus on Obama’s handling of foreign policy, in particular the rise of the Islamic State group in Syria and Iraq.

Offering a preview of the Republican response, House of Representatives  Speaker Paul Ryan accused Obama of “doubling down on the same failed foreign policies that have made the world a more dangerous place.”

“The president of the United States should be an optimist,” said Danielle Pletka of the conservative American Enterprise Institute. “Don’t slam him for wanting great things for our country.”

“Slam him for not talking about how the last seven years have seen an almost unprecedented decline not simply in our nation’s security, but in our ability to combat enemies near and far.”