Thousands of Catholic devotees attended the traditional “Pahalik” or kissing of the Black Nazarene statue at the Quirino Grandstand on Friday.

As of 9 a.m., there were around 23, 880 devotees waiting in line to kiss and touch the 400-year-old statue, said Paul HInlo, Head Security Consultant of the Quiapo Church.

Hinlo said the number of devotees is expected to surge as around 2,000 devotees are expected to arrive every hour.

Hinlo said the situation within Quirino Grandstand was generally peaceful.

“So far peace and order is okay and normal,” he said

The security official said they have not recorded any major untoward incident since the start of the Pahalik on Thursday.

Medical personnel from Department of Health (DOH) stationed in the area have recorded only six health-related incidents.

Dave Sevalla of the DOH said among the problems reported were hypertension and asthma.

Sevilla said devotees could visit their medical outpost for free check-up and checking of blood pressure. Free medicines are also given as well as first aid treatment.

READ: 900 soldiers to be deployed for Feast of Black Nazarene

Hinlo said nine million devotees attended the duration of the Black Nazarene celebration in 2015 and that the number expected to grow this 2016.

Millions of devotees are expected to attend the Traslacion or Black Nazarene Parade on Saturday, which will start at the Quirino Grandstand and end at the Quiapo Church. CDG 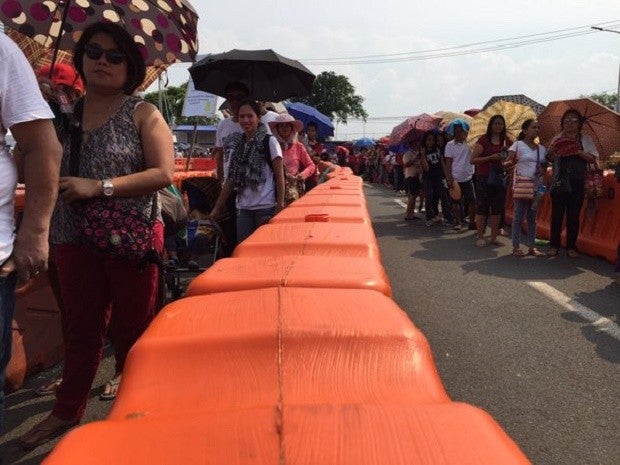