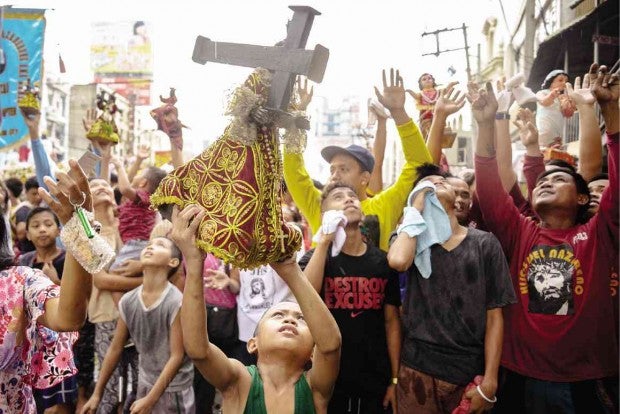 CROSSES TO BEAR Devotees, young and old, parade replicas of the Black Nazarene on Thursday, including an image aboard a “boat” on wheels (bottom photo). ELOISA LOPEZ/ANNELLE TAYAO-JUEGO 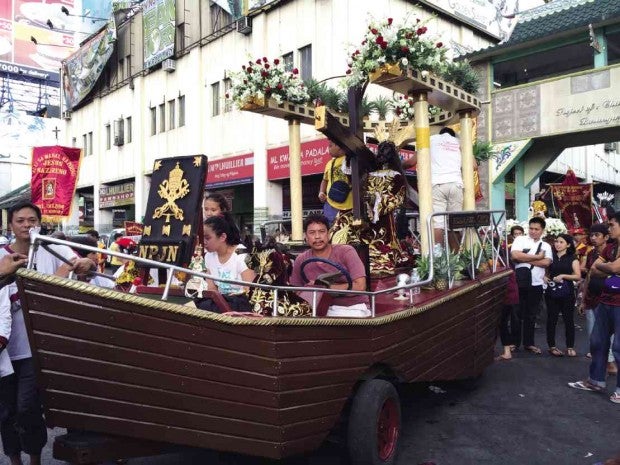 Church organizers broke tradition and held this year’s Pahalik on Jan. 7, a day earlier than usual, for Black Nazarene devotees who are expected to turn up in record numbers for the grand procession tomorrow.

In the Pahalik, the 400-year-old statue of the cross-bearing Christ is brought to Quirino Grandstand where pilgrims in a queue can kiss the image. It serves as a prelude to the Jan. 9 “traslacion,” the procession that brings the revered icon back to Quiapo church.

“So far, this is the earliest Pahalik in recent history,” said the church rector, Monsignor Hernando Coronel. “This is in response to the great devotion of the people. The number is getting bigger and bigger so we have to answer.”

Supt. Albert Barot, chief of the Manila Police District’s Ermita station, recalled that the statue was usually brought to the grandstand on Jan. 8, but this year it was done around 10:20 p.m. of Jan. 6.

Devotees started  forming lines as early as Thursday morning, without minding the intermittent drizzle. “This is their source of joy,” Coronel said. “They represent the sector of society who struggles through hard times. It’s their day with the Nazarene… For them, the Nazarene symbolizes God’s empathy.”

“(They’re) jovial, festive, and very Filipino,” the priest said of the early arrivals.

Also on Thursday, smaller Nazarene replicas were paraded around the church in another ritual leading to the traslacion. At least 700 images were paraded in the central Manila district, clogging traffic as the devotees followed a  2.2-kilometer route.

Elderly devotees interviewed by the Inquirer said their only wish was for the Nazarene to continue protecting their loved ones.

“My daughters take care of me now; to pray for them is the least I can do,” said a 64-year-old woman, a retired employee of the Philippine National Railways and wife of a retired Air Force sergeant from Laguna province.

Eighty-two-year-old Leonard Tayao from Bulacan province said he was praying for his family members abroad. His daughter is in Qatar while his son and grandson are seafarers.

“I will attend the Pahalik as long as I am physically able. All I pray for is their health and safety,” said Tayao, who came to the grandstand alone since his wife could no longer bear with the long lines and the heat.

Tayao’s devotion began in the 1970s, when he was suffering from tuberculosis. After praying to the image in Quiapo, he said, he was healed in just eight months.

Taking place on a weekend, tomorrow’s traslacion is expected to draw crowds bigger than last year’s, when around two million people followed the Nazarene or packed the 7-km procession route.

Barot said the figure could swell to 10 million.