Seoul delivers barrage of K-pop across border to North Korea 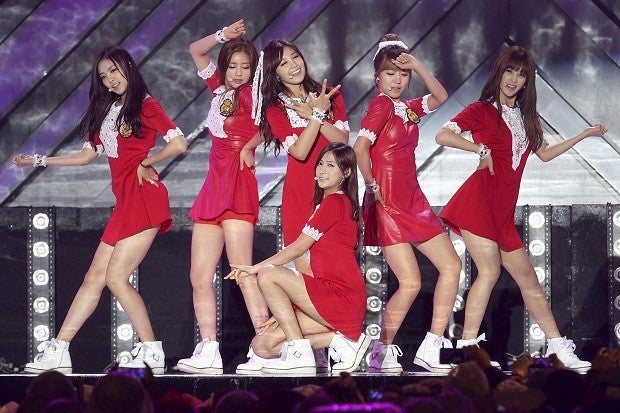 In this Oct. 6, 2013, file photo, South Korean K-Pop girl group Apink performs during Hallyu Dream Concert in Gyeongju, South Korea. South Korea is trying to get under the skin of its archrival with border broadcasts that feature not only criticism of North Korea’s nuclear program, troubled economy and human rights abuses, but also a unique homegrown weapon: K-pop. “Just Let Us Love” by a popular female group Apink is one of the songs being broadcast across the Demilitarized Zone between North and South Korea. AP FILE PHOTO

SEOUL, South Korea — South Korea tries to get under the skin of its archrival with border broadcasts that feature not only criticism of North Korea’s nuclear program, troubled economy and human rights abuses, but also a unique homegrown weapon: K-pop.

Performers on the propaganda playlist Seoul began blasting across the border Friday include a female K-pop band that rose to fame when its members fell multiple times on stage, and a middle-aged singer who rose from obscurity last year with a song about living for 100 years. The broadcasts are in retaliation for the North’s nuclear test Wednesday.

South Korea uses propaganda to boast of its democracy system and its culture, but adding light music helps draw attention. South Korea’s defense ministry says K-pop songs will pique interests of the listeners in the North.

A song by Lee Ae-ran whose title can be translated as “100 years of life” sends messages to death, or a god from the underworld, saying it isn’t yet time to say goodbye to living.

It was so popular among young and old that Kakao Talk, South Korea’s most popular messenger app, created emoticons, or animated images, out of the music video screen capture that users can exchange in place of sending text messages. The song inspired a host of online parodies and memes, and political parties reportedly sought to use it in their campaigns during upcoming general elections.

Also echoing over the Demilitarized Zone: GFriend’s “Me gustas Tu,” about a girl who is trying to muster courage and overcome shyness to ask a boy out. GFriend rose to fame last year when a fan posted a video on YouTube showing its members standing up after falling several times on a slippery stage to complete an outdoor performance. The YouTube video has nearly 9 million views since it was uploaded in September.

Other songs being broadcast across the border are “Just Let Us Love” by a popular female group Apink and “Bang Bang Bang” by idol boyband Big Bang.

North Koreans are prohibited from listening to K-pop, and are allowed to listen only to government-controlled radio stations or TV channels. Despite that, North Korean defectors say South Korean music is popular in their home country, with songs and other elements of South Korea popular culture smuggled in on USB sticks and DVDs.