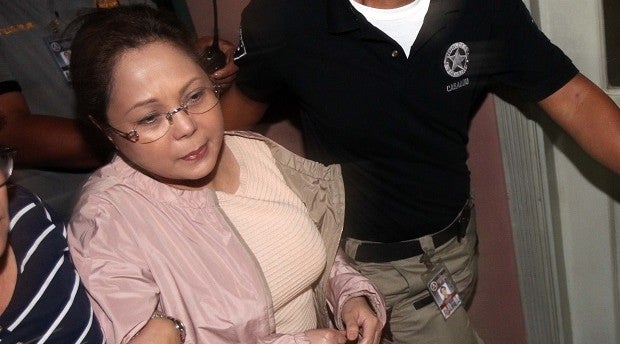 Detained lawyer Jessica Lucila “Gigi” Reyes has urged the Sandiganbayan to postpone the trial of her graft and plunder cases until the Supreme Court has ruled on her petition questioning her indictment in the P10-billion pork barrel scam.

Reyes, the former chief of staff of Sen. Juan Ponce Enrile, also asked the antigraft court’s Third Division to limit the hearings on her cases to just once a week instead of three times weekly which the court earlier set.

Enrile, one of the principal accused in the case, has won temporary liberty after the high court granted his bail plea on humanitarian consideration in August last year.

In seeking a postponement of the hearing set to start on Jan. 13, Reyes told the court that the petition for certiorari she filed on Sept. 22, 2014, was already “ripe for adjudication.”

She said her separate amended petitions accusing the Office of the Ombudsman of violating her constitutional right to due process and requesting for the issuance of a temporary restraining order against the Sandiganbayan, had also remained pending since Jan. 6, 2015, in the high court.

“Such being the case, it is expected that the Supreme Court will issue its decision shortly,” read a portion of Reyes’ Jan. 5 petition.

“As a matter… of judicial courtesy to the Supreme Court… and in order not to render moot and academic the threshold issues raised therein, accused Reyes respectfully implores this honorable court to suspend the proceedings in this instant case against her.”

Reyes, who is locked up at Camp Bagong Diwa in Taguig City, argued that one of the issues she raised before the high court was the failure of the Ombudsman to furnish her copies of the witnesses’ testimonies, including that of Ruby Tuason.

She said Tuason, the former social secretary of former President and now Manila Mayor Joseph Estrada, was named by the prosecution as its first witness against her.