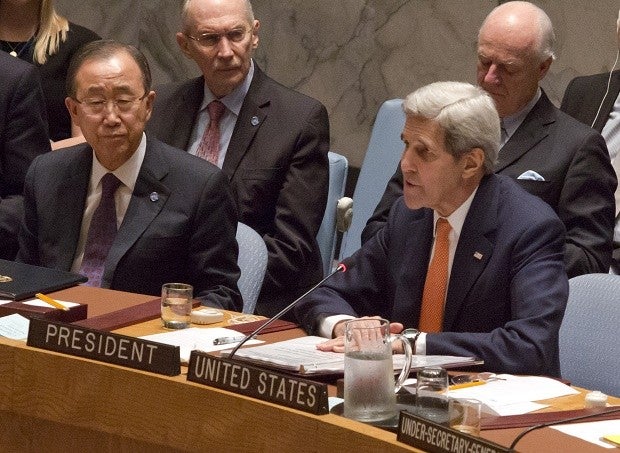 UN Secretary General Ban Ki-moon, left, listens as US Secretary of State John Kerry, right, address a gathering in the UN Security Council of foreign ministers following a vote on a draft resolution concerning Syria, Friday, Dec. 18, 2015 at UN headquarters. UN Security Council members have unanimously approved a UN resolution endorsing a peace process for Syria including a cease-fire and talks between the Damascus government and the opposition. AP

UNITED NATIONS — The UN Security Council urged the warring parties in Yemen on Tuesday to resume a cease-fire and participate in a new round of talks in mid-January.

The council welcomed “the positive progress” in the last round of UN-facilitated talks from Dec. 15-20 and called on the government and Shiite rebels known as Houthis to engage in new talks without preconditions, reject violence, and refrain from provocations.

The council statement, issued after a closed briefing, expresses deep concern at Yemen’s “dire humanitarian situation which continues to worsen.”

The conflict pits the government, backed by a Saudi-led coalition, against Houthis allied with a former president and backed by Iran. Peace negotiations were launched in December and a cease-fire was declared, but both government forces and rebels ignored it.

The truce formally ended over the weekend — just as the Saudis broke diplomatic ties with Iran following attacks by Iranian protesters on its diplomatic missions.

The Saudi-Iran rupture has raised concerns about peace prospects in Yemen, the Arab world’s poorest country.

Yemen special envoy Ismail Ould Cheikh Ahmed is heading back to the region on Wednesday to get commitments from both sides for a new cease-fire and talks, the UN said.

Saudi Arabia’s UN Ambassador Abdallah al-Moualimi said late Monday that his country’s break in diplomatic ties with Iran will have no effect on its efforts to promote peace in Yemen and expressed hope the next round of talks will be productive.

READ: UN says 5,700 have been killed in Yemen conflict since March