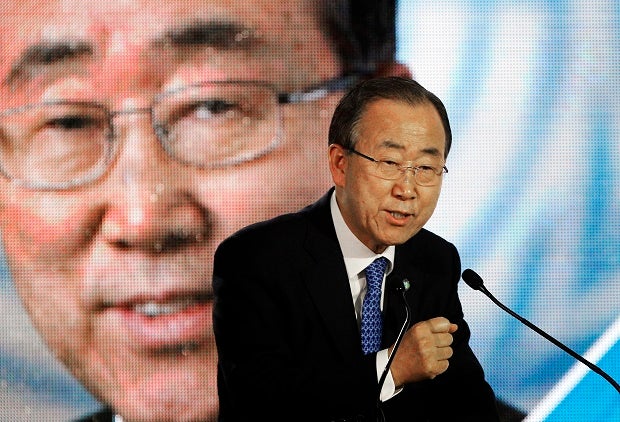 UN Syria envoy Staffan de Mistura traveled to Riyadh for talks and was to head later this week to Tehran to seek assurances that hard-won gains in the Syria peace process were not in jeopardy.

De Mistura is counting on broad support to launch peace talks between President Bashar al-Assad’s government and the opposition in Geneva on January 25—the culmination of a three-month effort involving all key players.

Saudi Arabia cut off diplomatic ties with Iran on Sunday after angry protesters ransacked and set fire to the Saudi Embassy in Tehran over the execution of Shiite cleric Nimr al-Nimr.

UN Secretary-General Ban Ki-moon spoke by phone with the Saudi and Iranian foreign ministers to urge them to “avoid any actions that could further exacerbate the situation,” said Ban’s spokesman Stephane Dujarric.

“A breakdown of relations between Riyadh and Tehran could have very serious consequences for the region,” said Dujarric.

Both Iran and Saudi Arabia have a crucial role in the diplomatic push to end the nearly five-year war in Syria and to bring about a political settlement for Yemen.

Saudi Ambassador Abdallah al-Mouallimi said the break in relations with Iran “should have no effect because we will continue to work very hard to support the peace efforts in Syria and Yemen.”

The envoy said Saudi Arabia will attend the next round of Syria talks, but he also took a swipe at Iran’s role in the diplomatic push to end the war in Syria.

“The Iranians even before the break of diplomatic relations have not been very supportive, not very positive in these peace efforts,” said Mouallimi.

In his conversation with Saudi Foreign Minister Adel al-Jubeir, Ban expressed “disappointment” over the execution of al-Nimr, whose case he had raised with Riyadh many times, said Dujarric.

While the UN chief said the Iranian attack on the Saudi embassy was “deplorable,” the Saudi decision to break off relations with Tehran was “deeply worrying,” he told Jubeir.

Ban spoke to Iranian Foreign Minister Mohammad Javad Zarif on Sunday and urged him to protect diplomatic facilities after the attack on the Saudi embassy.

Taking a a conciliatory tone, Iran’s Ambassador to the United Nations, Gholamali Khoshroo, expressed regret over the attack and pledged in a letter to Ban that “Iran will take necessary measures to prevent the occurrence of similar incidents in the future.”

The Saudi-Iran rift was seen as a potential setback to the peace effort in Syria that had been hailed as a breakthrough for bringing Iran and Saudi Arabia at the table, along with Russia, the United States and other powers.

Tehran is among Assad’s strongest allies while Riyadh is backing militias fighting Damascus.

In Yemen, a Saudi-led coalition in March launched an air campaign against Iran-backed Shiite rebels.

Ban urged Saudi Arabia “to renew its commitment to a ceasefire” after the coalition announced on Saturday that it was ending the truce with the rebels.

The UN envoy for Yemen, Ismail Ould Cheikh Ahmed, heads to Riyadh on Wednesday to push for a renewed ceasefire.