UN says 5,700 have been killed in Yemen conflict since March 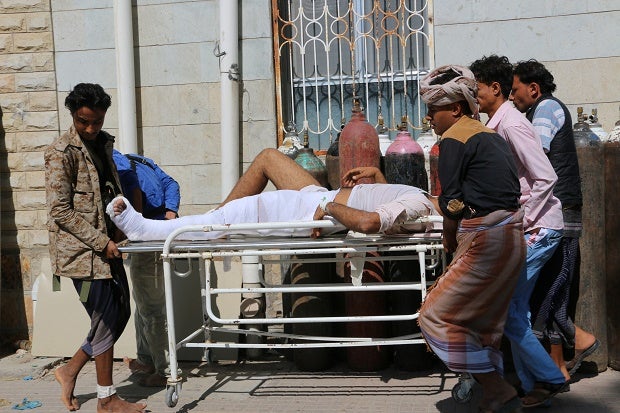 People carry a man who was injured in clashes between tribal fighters and Shiite rebels known as Houthis, in Taiz, Yemen, Sunday, Oct. 25, 2015. Yemen’s fighting pits the Houthis and allied army units against forces loyal to the internationally recognized government as well as southern separatists and other militants. The UN says at least 2,577 civilians were killed since the Saudi-led air campaign began in March, while 5,078 have been injured. AP

UNITED NATIONS — The United Nations says 5,700 people have been killed in the conflict in Yemen since March 26, including 830 women and children, while efforts to coax all sides into another attempt at peace talks continue.

He said 21.2 million people, or 82 percent of the country’s population, require some kind of humanitarian assistance. Fourteen million people lack sufficient access to health care. And 1.8 million children have been out of school since the conflict began.

He did not say how many civilians were among the 5,700 killed during the conflict. The UN human rights office in late October reported that more than 2,600 civilians had been killed so far, about two-thirds of them by airstrikes.

Since March, a coalition led by neighboring Saudi Arabia and backed by the United States in support of Yemen’s internationally recognized government has been fighting Iran-backed Houthi rebels who had seized large parts of the country, including the capital, Sanaa.

The international community has pleaded for months for the coalition to ease restrictions on crucial commercial imports such as fuel and medical supplies. Van Der Klaauw said supplies of fuel, food, medicines and other supplies were dangerously low, while food prices have soared.

The conflict also has severely hurt international efforts to get aid to many places around Yemen.

In addition, he noted that more than 8,800 human rights violations have been verified since the conflict began.