UN envoy: No time to waste for Yemen peace talks 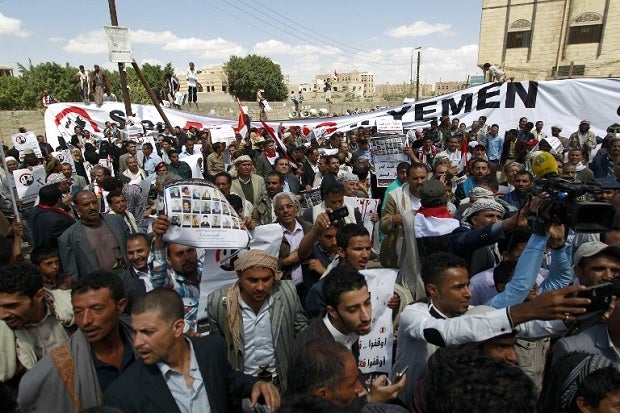 Yemeni demonstrators protest outside the United Nations (UN) office in the capital Sanaa on October 18, 2015, against ongoing military operations and airstrikes carried out by the Saudi-led coalition on Yemen. AFP

The UN special envoy for Yemen said Friday he would begin working immediately with the government and rebel leaders to determine an agenda and date for peace talks, but warned a “catastrophic” humanitarian crisis loomed.

Ismail Ould Cheikh Ahmed told the Security Council that the Huthi rebels and backers of former president Ali Abdullah Saleh had “clearly committed” to carrying out council resolution 2216, which calls for a negotiated withdrawal by the rebels “from Yemen’s key cities and a surrender of all heavy weapons to the state.”

He said the Yemeni government of President Abedrabbo Mansour Hadi — which last month backed away from UN-sponsored talks in Oman, demanding that the rebels first withdraw their forces — had agreed to send a delegation to the upcoming negotiations.

No date for the talks has yet been set.

The Security Council separately issued a statement calling on “all Yemeni parties to resume and accelerate United Nations-brokered inclusive political consultations” and to engage in the talks in “a flexible and constructive manner.”

Yemen, one of the poorest countries in the world, has been wracked since March by a conflict that has claimed nearly 5,000 lives, according to the UN. In that month a Saudi-led Arab coalition launched air strikes against the Huthi rebels, a once obscure Shiite group with Iranian backing.

Ould Cheikh Ahmed told the Security Council that the already suffering people of Yemen faced a “catastrophic” situation, with up to 21 million people — 80 percent of the population — in need of humanitarian aid.

He said matters had grown more dire since the Arab coalition, which supports Hadi, launched its intense bombing campaign.

A naval blockade has prevented sea-going vessels from bringing fuel supplies to Yemen, with drastic effects on hospitals in particular, Ould Cheikh Ahmed said. Only one percent of the country’s monthly fuel needs were met by September deliveries, he added.

The Security Council said that a UN appeal for $1.6 billion in humanitarian funds for Yemen was only 47 percent funded and urged the international community to contribute more.

It called on all parties to the conflict to facilitate the urgent delivery of humanitarian aid and fuel for civilian uses, “including through all of Yemen’s ports.”

It also urged all parties in the talks to negotiate “with no preconditions and in good faith.”

Resolution 2216 provides a “framework” for negotiations, Ould Cheikh Ahmed said, adding that it is up to the Yemeni parties to agree on ways to implement it.

An attempt in June to bring the Yemeni parties together at a negotiating table also failed.