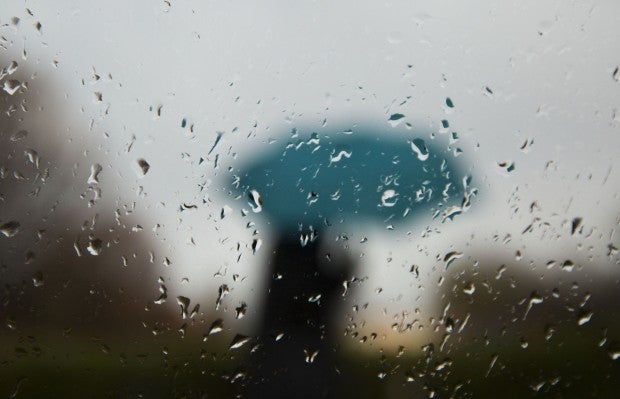 A pedestrian heads towards his car in rain and high winds, Wednesday, Dec. 23, 2015, in Birmingham, Ala. A weather pattern that could be associated with El Nino has turned winter upside-down across the U.S. during a week of heavy holiday travel, bringing spring-like warmth to the Northeast, a risk of tornadoes in the South and so much snow in parts of the West that there are concerns about avalanches. On Christmas Day, it could be warmer in New York City than Los Angeles. APac

Tornadoes touched down in Mississippi and Indiana, the National Weather Service said. The spring-like storms damaged buildings and knocked down trees, and thousands of people were without power in Indiana and Arkansas.

A tree blew over onto a house in Arkansas, killing an 18-year-old woman and trapping her 1-year-old child inside, authorities said. Rescuers pulled the toddler safely from the home.

A tornado touched down in northwest Mississippi, said Jim Belles, a meteorologist with the National Weather Service in Memphis, Tennessee.

“We’re tracking a very large tornado,” Belles said. “We’re hearing reports of some damage in parts of Coahoma County and reports of injuries, but we can’t confirm any injuries.”

Television images showed the tornado appeared to be on the ground for more than 10 minutes. Interstate 55 was closed in both directions as the tornado approached, the Mississippi Highway Patrol said.

After an EF-1 tornado struck the south Indianapolis suburb of Greenwood, television stations showed pictures of damage including a portion of a roof blown off a veterinary office.

The biggest threat for tornadoes was in a region of 3.7 million people in Mississippi, Tennessee and Arkansas and parts of Missouri, Illinois and Kentucky, according to the national Storm Prediction Center in Oklahoma. Twisters were possible from midday Wednesday through the evening.

In a reversal of a typical Christmas, forecasters expected New York to be in the mid-60s Fahrenheit (about 18 degrees Celsius) on Christmas Eve — about the same temperatures as Los Angeles. Only about half of the U.S. should expect the possibility of a white Christmas.

“I try not to think about it too much because it’s very bizarre and it’s unusual for this time of year for it to be so warm and for such a long time,” said Marla Wojacksyk, 48, who was taking her excited 4-year-old daughter to see Santa Claus at Macy’s department store in Manhattan.

“But I have a little girl and she’s enjoying the Christmas spirit,” Wojacczyk added, as her daughter Zoe jumped up and down with glee, pulling her mother toward the store’s entrance.

Across Mobile Bay in the small town of Loxley, Mandy Wilson watched the angry gray sky and told drivers to be careful as she worked a cash register at Love’s Travel Stop.

The threat of severe weather just before Christmas is unusual, but not unprecedented, said Greg Carbin, a meteorologist at the national Storm Prediction Center. On Christmas Day in 2012, a storm system spawned several tornadoes, damaging homes from Texas to Alabama.

“If you go through these neighborhoods, there are a lot of people very proud of what they’ve put out and they’ve got stuff everywhere – all these ornaments and deer and everything else,” Clements said. “They’re not manufactured to withstand that kind of wind speed, so they become almost like little missiles.”

Once the strong storms clear out, forecasters say, the high temperature in Atlanta on Christmas Eve is expected to be in the mid-70s (about 24 degrees Celsius). That could break the record for Dec. 24, which is 72 degrees (22 Celsius) set in 1984, according to weather service records.

In New York City, ice skaters wore shorts at the rink in Bryan Park. Some shoppers grumbled about a drab and humid drizzle.

“It’s too warm for me. I don’t like it. I prefer the cold in the winter, in December. Gives you more of that Christmas feel,” said Daniel Flores, a concierge from the Bronx, his light jacket zipped open as he strolled in Manhattan.