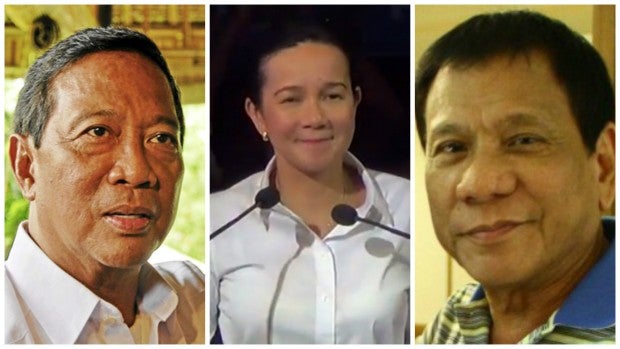 The two presidential aspirants were picked by 26 percent of the 1,200 respondents asked in the survey conducted from December 12-14.

The survey, which was first reported by Business World on Tuesday, had a margin of error of ±3.

This was the first time SWS released a presidential poll following the filing of the aspirants’ certificates of candidacy (COC).

In September, an SWS presidential survey saw Poe leading with 26 percent. Binay came in second with 24 percent, while Roxas was third with 20 percent. They, however, were considered to be in a statistical tie.

Duterte, who at that time claimed that he was not going to run, obtained 11 percent. This means a nine-percentage-point jump for him from September to December.

Santiago had two percent in September.

The result came a day after a Pulse Asia poll showed the Binay has regained his lead over his presidential rivals. IDL

READ: Pulse: Binay back on top