Pulse: Binay back on top 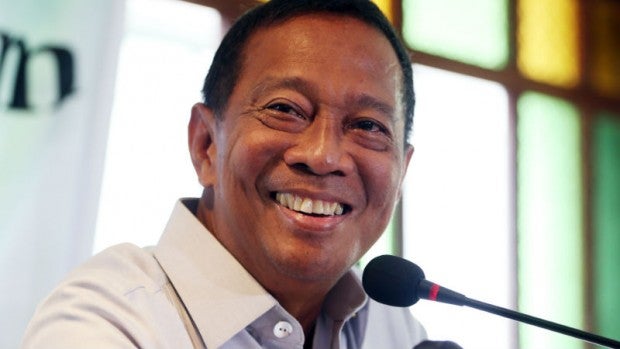 VICE President Jejomar Binay has regained his lead in the May 2016 presidential preference polling, while Sen. Grace Poe and Davao City Mayor Rodrigo Duterte are statistically tied at second spot, according to results of the latest Pulse Asia survey.

The nationwide noncomissioned poll conducted on Dec. 4-11 found that 33 percent of 1,800 respondents who were registered voters would vote for Binay, had the elections been held during the survey period.

Duterte and Poe were statistically tied at second place with 23 percent and 21 percent, respectively.

Behind them was Liberal Party (LP) standard-bearer Mar Roxas with 17 percent, and Sen. Miriam Defensor-Santiago, with 4 percent.

Results of the survey, which were released Tuesday, also found Sen. Francis “Chiz” Escudero still leading the vice presidential race with 29 percent, up by 6 points from 23 percent in September.

“In the midst of dirty politicians, there are still many who trust me,” Binay said in a statement welcoming the surge in his popularity. “From the bottom of my heart, I thank our kababayan (countrymen) for their unwavering support.”

Poe said: “The disqualification cases thrown my way have created confusion among the people. I will hurdle this and prove that I am a qualified and legitimate Filipino candidate. Sen. Grace Poe is still your candidate for President in 2016.”

“The timing of the survey coincided with the misunderstanding on the traffic-pope issue,” Duterte’s spokesperson, Peter Laviña, said in reference to the mayor cussing Pope Francis in his speech launching his candidacy on Nov. 30. He later said the expletive was prompted by his anger at the Aquino administration’s handling of the monster traffic jams.

Said Roxas: “We have seen that this is anybody’s race. Last month Grace was first. Just last week, it was Duterte. Now, it’s Vice President Binay. Maybe next time, it’ll be our turn.”

In the previous noncommissioned “Ulat ng Bayan” (Report to the Nation) survey conducted on Sept. 8-14, Poe led presidential aspirants with 26 percent, followed by Roxas (20 percent), Binay (19 percent), Duterte (16 percent) and Santiago (3 percent). Duterte’s name was not yet included in the survey questionnaire then.

Analyst Edmund Tayao, a political science professor at University of Santo Tomas, said it appeared that Binay gained from negative issues against Poe and Duterte.

Poe is grappling with disqualification cases centering on her purported failure to meet the constitutional requirements for presidential candidates to be a natural-born Filipino and have a 10-year residency.

“Voters seem to be taking their time in making their decision regarding who to vote for as President. Their minds are still changing,” Tayao said in an interview with the Inquirer.

“That Vice President Binay is No. 1 does not have anything to do with his campaign, which has been quiet lately,” Tayao said. 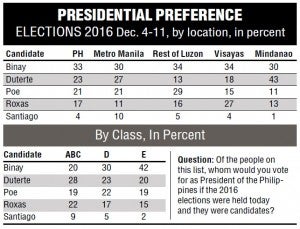 “He hasn’t been answering allegations thrown against him about corruption. However, he got lucky because there were also issues against his rivals Senator Poe and Mayor Duterte,” he added.

“It seems that he (Binay) is the one gaining from that. Maybe some of the support from Poe or Duterte also managed to transfer to Mar Roxas, but more appeared to be leaning toward supporting the Vice President.”

“I think the decisions of the First and Second divisions of Comelec affected voter preference for Senator Poe,” Pulse Asia research director Ana Tabunda said, referring to the disqualification cases. “Some respondents thought she is already disqualified. Others may be unsure she can still run.”

The December survey, which had a margin of error of plus-or-minus 2 percentage points, asked respondents: “Of the people on this list who would you vote for as President of the Philippines if the 2016 elections were held today and they were candidates?”

Across areas except in Mindanao, Binay was the preferred candidate, with proportions ranging from 30 percent in Metro Manila and Mindanao to 34 percent in the Visayas and rest of Luzon.

Duterte was the top pick in Mindanao (43 percent).

The Vice President was also the top choice among Class D (30 percent) and Class E (42 percent), while Duterte was the most preferred among Classes ABC (28 percent).

During the latest survey period, among the issues that dominated the news include Duterte’s filing of his certificate of candidacy (COC) for President under the Partido Demokratiko Pilipino-Lakas ng Bayan (PDP-Laban) to replace Martin Diño, the party’s initial standard-bearer.

The 5-4 vote of the Senate Electoral Tribunal denying the petition questioning Poe’s citizenship; the decision of the First and Second divisions of the Commission on Elections to cancel Poe’s COC for President for her failure to meet the citizenship and residency requirements; and the aftermath of Typhoon “Lando” (international name: Koppu), the strongest storm to hit the country this year.

Poe and Duterte have also topped other privately commissioned surveys in the past months.

Just last month, Poe topped a privately commissioned survey conducted by Pulse Asia from Oct. 18 to Oct. 29, which found 39 percent of 2,400 respondents saying she was their choice for President. Following her were Binay (24 percent), Roxas (21 percent) and Santiago (11 percent).

The survey, which Pulse Asia said had been released by a client, had a margin of error of plus-or-minus 1.7 percentage points.

Tayao said Poe should address the disqualification cases against her. “It’s not just a legal issue but also a moral one … . It seems that some quarters saw these issues to mean that she is not a loyal Filipino.”

As for Duterte, Tayao said: “He has to realize that running for a national position is different from running for a local position. His image as a tough-talking mayor has its own place, and is suitable for some issues like crime or traffic. He has to learn how to calibrate (his image), and to avoid off-the-cuff remarks.”

On Roxas, Tayao said: “His campaign has finally settled on the image of him they want to promote. It was confusing at first. His campaign has to capitalize on his strengths.” With reports from Tarra Quismundo, Niña Calleja, Gil C. Cabacungan, DJ Yap and Leila B. Salaverria