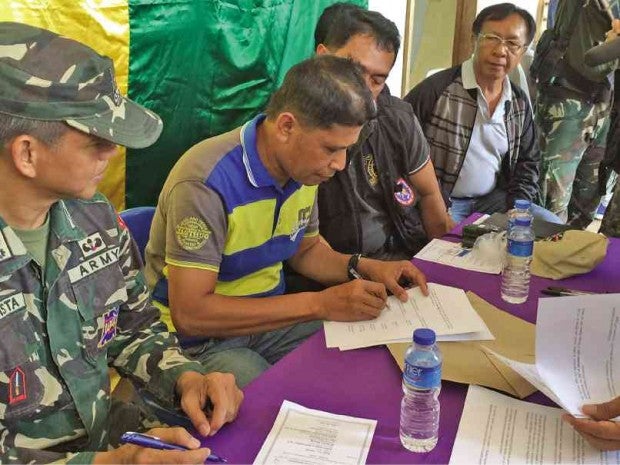 MILF’s 114th Base Command commander Dan Asnawi signs a document committing to work with the military, local government and International Monitoring Committee to secure the liberated communities from the Abu Sayyaf Group.

But military and civilian officials said the aftermath of the massive military operation against the Abu Sayyaf resulted in the liberation of at least one village from the grip of the bandit group.

A similarly massive operation was also being conducted in Sulu, where the bandit group has been known to operate.

Gov. Mujiv Hataman of the Autonomous Region in Muslim Mindanao, while becoming emotional over the displacements and the destruction of civilian properties, sought for understanding from those who fled, particularly from Barangay Macalang.

What was important, he said, was that the village was now free of Abu Sayyaf bandits and that no civilian had been killed or hurt in the operation.

“I became so emotional because we have so many people whose houses were destroyed by (artillery) fire but I assure them that the national, and even the regional government, will rehabilitate whatever was destroyed,” Hataman said.

Most of the houses in Macalang were destroyed by air and ground assault.

“We are fortunate because no one from the civilian side got hurt. Displaced, yes. Some are temporarily housed in school, multipurpose halls and the rest with their relatives and friends,” Lajid said.

Barrientos admitted it took them more than a week to secure Macalang from the control of the Abu Sayyaf but it was worth it, despite the three deaths among the military operatives and the wounding of 26 others.

The military operation, Barrientos said, ended with the seizure of an Abu Sayyaf camp located in Sitio Bohe Libi and Sitio Bohe Buug.  He said the camp had about 28 structures, including 10 dug-in bunkers, which could accommodate up to 15 persons each. The whole camp could accommodate 250 persons, he said.

Brig. Gen. Glenn Macasero, chair of the government ceasefire committee, said he was hoping the joint endeavor could “come up with a mechanism that could safeguard and make the places hostile to the Abu Sayyaf Group.”

In Sulu, at least five Abu Sayyaf gunmen were killed on Tuesday as the military continued its combat operation there.

Dela Cruz said no soldier was harmed in the incident that took place in Barangay Liang around 8:10 a.m.

He said only one body belonging to a still unidentified bandit had been recovered, along with seven assault rifles of various caliber, ammunition, two motorbikes and other items.

“This is a continuing operation aimed at the defeat of the Abu Sayyaf and also to safely rescue all their kidnap victims,” he said. Julie Alipala, Inquirer Mindanao