President Benigno Aquino III’s Cabinet will continue to push for reforms despite receiving a lower satisfaction rating this quarter, according to the latest Social Weather Stations (SWS) poll.

Aquino’s Cabinet, as a whole, got a satisfaction rating of 38 percent (from 40 percent in the third quarter) based on the December 5 to 8 survey of SWS. The same survey, conducted among 1,200 adults, also showed that 27 percent (from only 23 percent in September) said that they were dissatisfied with the Cabinet while 32 percent (from 34 percent last quarter) were undecided.

This resulted in a net satisfaction of +11 for December, from +16 in September.

“While we value the insights provided by public opinion surveys such as those by the SWS, the entire Cabinet remains steadfast in its commitment to fulfill our respective mandates and to deliver on the priority reform and development programs anchored on inclusive growth,” he added. 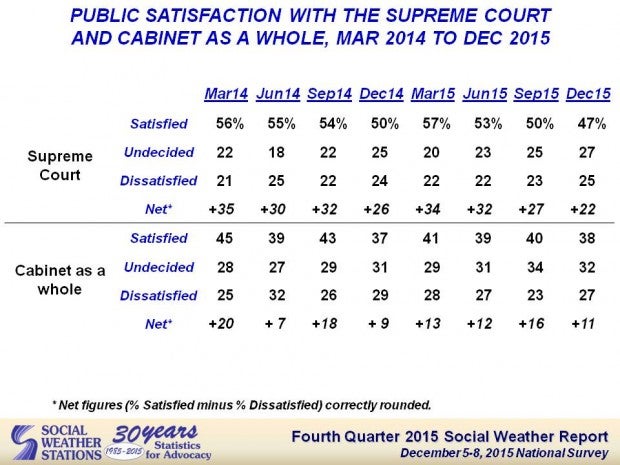 The Cabinet, compared to the Senate, House of Representatives and Supreme Court, has historically received lower satisfaction ratings.

The Cabinet, which reports directly to Aquino, is composed of the heads of the departments of various executive branches, as well as offices under the Office of the President. CDG