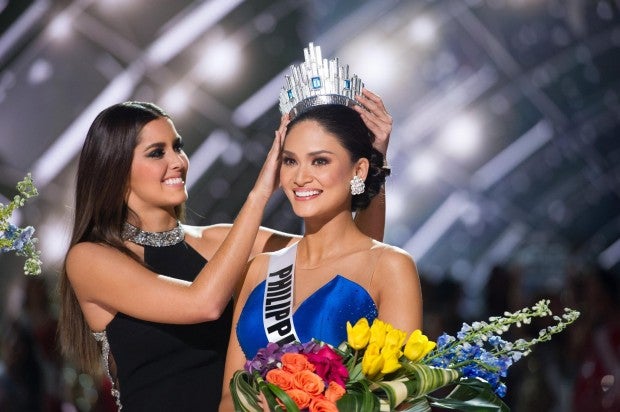 Some leftist activists on Monday reacted to the seemingly “pro-American” answer of Miss Universe 2015 Pia Alonzo Wurtzbach in the first round of the question-and-answer portion of the pageant night on Monday (Philippine time) in Las Vegas, United States.

During the question-and-answer portion, Wurtzbach was asked on her stand on the reestablishment of US military bases in the country.

“I don’t see any problem with that at all,” she said.

“We hope she will have a change of mind and heart on this issue by learning the history of our nation under US colonial rule,” de Jesus said.

The lady solon hopes that that Wurtzbach will lend her voice to call out the supposed abuses of the Americans to Filipinos.

”It was calculated to elicit a YES, considering that the contestant was under a lot of pressure. Saying NO to US troops, in front of a predominantly American crowd, would harm her chances of winning,” Reyes said.

He said that by going with the “safe” answer, Wurtzbach did not jeopardize her chances of winning.

Reyes hopes that the beauty queen’s answer isn’t her “final, final” answer, a nod to the response given by Miss Universe 4th runner-up Venus Raj in 2010.

“I hope she would find time in the future to sit down with the victims of abuses by US troops. Hindi naman siguro yun ang (Perhaps that isn’t the ) FINAL, FINAL answer nya,” he said.

Meanwhile, former Bayan Muna party-list lawmaker Teddy Casino Jr. said that Wurtzbach should have acknowledged the problems between US and the Philippines.

“She could have at least acknowledged that there are problems that have to be addressed re. US bases in PH,” Casino said on his Twitter page.

“Pag-uwi ni Pia (When Pia comes home) she should be briefed by Gabriela on the issue of US troops in PH to help her get a better perspective,” he added.

Wurtzbach’s victory was shadowed by a gaffe committed by pageant host Steve Harvey who erroneously crowned Miss Colombia Ariadna Gutierrez as the winner.

The 26-year-old Cagayan de Oro beauty is the third Filipina to take home the crown, after a 42-year title drought. CDG

Read Next
11 taken to hospital after car hits people on Vegas Strip
EDITORS' PICK
Tired of your Wi-Fi signal problems at home? Here’s a solution!
Must-know scams to avoid when buying cars
Average new COVID-19 cases daily in NCR down 30%
POVA x Mobile Legends Bang Bang: A partnership that’s built to win
Patients evacuated as fire hits PGH
Concepcion: Consider vaccine passes once herd immunity reached in NCR Plus
MOST READ
Patients evacuated as fire hits PGH
Mikey Garcia ‘not getting hopes up’ as Pacquiao fight yet finalized
Go pushes bill seeking creation of Center for Disease Control and Prevention
Dave Bautista on his Filipino grandfather, living with regret and being around superheroes and zombies
Don't miss out on the latest news and information.