Bongbong on Duterte-Roxas 'slapping match': Leave me out of it | Inquirer News
Close
menu
search

Bongbong on Duterte-Roxas ‘slapping match’: Leave me out of it 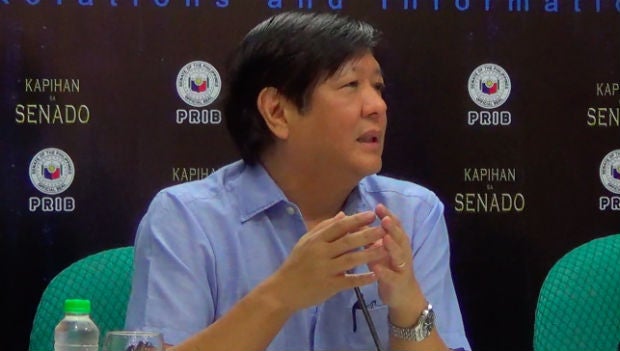 Senator  Ferdinand “Bongbong” Marcos Jr. distanced himself from  the heated verbal tussle between  two presidential aspirants, saying he  would not want to be slapped  in the end.

“It’s  Christmas. its the season of joy and let’s indulge ourselves a little bit and feel some of that  joy and spread some of that joy,” Marcos said at a press conference  on  Thursday.

The senator was reacting to the  “slapping match” between Davao City Mayor Rodrigo  Duterte and  former Interior Secretary Mar Roxas.

After threatening to slap Roxas for  saying that his crime buster image in his province was a myth, Duterte again challenged his rival, this time, to a gunfight.

Asked if Marcos has advice for Duterte, the senator said: “If he asks me for advise I will give it. I don’t think he needs my advise. He knows what to do.”

Marcos earlier courted the mayor to be his president in 2016. But even before Duterte could decide whether or not to join the presidential race,  Senator Miriam Defensor-Santiago  already announced that Marcos would be her running mate. Duterte later named Senator Alan Peter Cayetano as his running mate.

(Like what I said, leave me out of it. We’re for joy, we won’t be slapping anyone or whatever, lest I might get slapped, right?)

Besides, the senator said Duterte  and Roxas are his friends.

“I’d rather not enter into that discussion. I’m sure they will resolve it between the two of them,” he  added. CDG