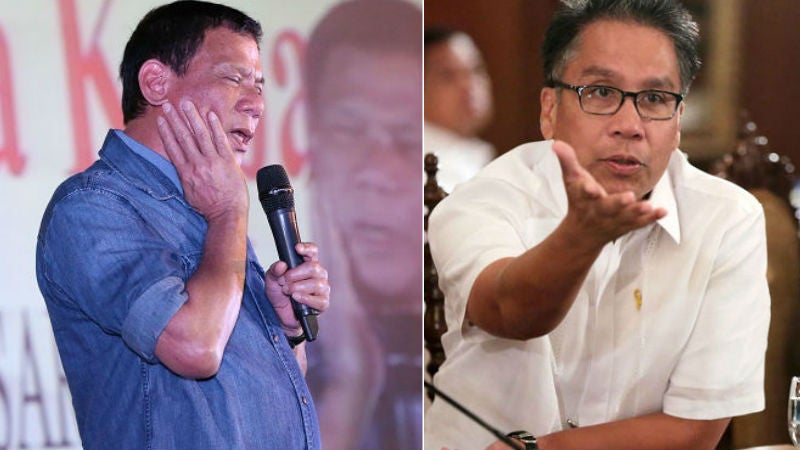 “Let’s shoot it out instead. People might be afraid to die, but what am I afraid of?” Duterte said in Bisaya on Monday night.

But the tough-talking mayor—and lawyer—may yet find himself haled to court for issuing the challenge and violating Article 261 of the Revised Penal Code of the Philippines.

According to Article 261, “the penalty of prision correccional in its minimum period (four months and one day to two years and four months) shall be imposed upon any person who shall challenge another, or incite another to give or accept a challenge to a duel, or shall scoff at or decry another publicly for having refused to accept a challenge to fight a duel.”

Duterte issued the challenge to Roxas when asked by reporters about his earlier statement saying he would engage Roxas in a slapping match for allegedly lying about being a graduate of the prestigious Wharton School.

The mayor twitted Roxas about his Wharton studies after the Liberal Party standard-bearer branded “a myth” Duterte’s claim about the peace and order situation in Davao City and said that the city was among those with the highest crime rate in the country.

During an ambush interview on Monday night, Duterte maintained that Roxas was not a Wharton graduate, saying that two congressmen, who also attended Wharton School at the University of Pennsylvania, confirmed this to him.

Duterte also dismissed the documents presented by Roxas to prove his being a Wharton alumnus, as “Recto-made,” referring to the avenue near the University Belt in Manila notorious for producing fake school certificates.

On Tuesday, the word war between the two presidential aspirants turned into threats of physical violence after Roxas challenged Duterte to a fistfight instead of a slapping match.

“Do what you want. But why a slapping match? That’s only for women. Let’s have a fistfight,” Roxas told reporters in an ambush interview in Cubao, Quezon City.