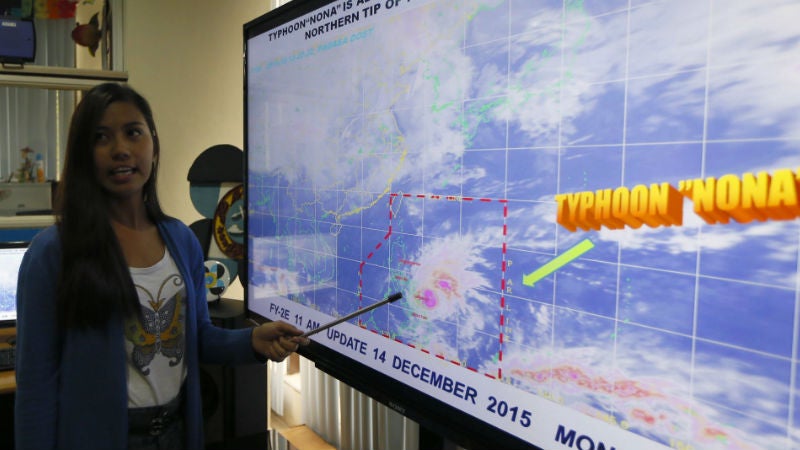 Government weather forecaster Loriedin De La Cruz briefs the media on Typhoon Melor at the weather bureau center in suburban Quezon city, northeast of Manila as it hits the eastern Philippines Monday, Dec. 14, 2015. Thousands of residents evacuated as the typhoon slammed into the eastern Philippines, where flood- and landslide-prone communities are bracing for destructive winds, heavy rains and coastal floods of up to 4 meters (13 feet), officials said Monday. (AP Photo/Bullit Marquez)

A POTENTIAL tropical storm threatens the country on the heels of Typhoon “Nona” (international name: Melor), which battered central Philippines on Monday and Tuesday and left at least four people dead and millions without power ahead of Christmas.

The low pressure area in the Pacific, about 1,600 kilometers east-southeast of Mindanao as of Tuesday, could reach the Philippine area of responsibility on Wednesday, according to the Philippine Atmospheric, Geophysical and Astronomical Services Administration (Pagasa).

The new weather disturbance could start to affect the country later in the week, as Nona leaves the Philippine area of responsibility on Friday when it is expected to weaken into a low pressure area in the West Philippine Sea.

In an information alert, the US military’s Joint Typhoon Warning Center said the “potential for the development of a significant tropical cyclone within the next 24 hours is high.”

Should the incoming low pressure area develop into a cyclone, it will be locally named “Onyok,” the second storm to hit the country this month and the 15th this year.

Onyok is next on the list of typhoon names after Nonoy, which Pagasa was ordered to change at the last minute to Nona since it sounded like the President Aquino’s nickname, Noynoy.

Nona battered the Mindoro provinces most of Tuesday after crossing Romblon province from Masbate province earlier in the day, remaining powerful with winds up to 140 to 170 kilometers per hour and heavy to intense rains within its 250-km diameter.

Northern Samar, Sorsogon, Masbate, Romblon and Mindoro took the brunt since the center of the typhoon island-hopped in these provinces since Monday.

The typhoon did not exit land until Tuesday night, contrary to the forecast that it would leave the Mindoro provinces by Tuesday afternoon.

It slowed down but did not weaken as expected because it drew strength from warm surface waters while crossing the Sibuyan Sea, according to Pagasa.

Pagasa said the typhoon would be over the West Philippine Sea on Wednesday and skirt Palawan province on Thursday on its way out of the Philippine area of responsibility on Friday, all the while gradually weakening from a tropical storm into a low pressure area.

At a press briefing on Tuesday night, National Disaster Risk Reduction and Management Council (NDRRMC) said only one fatality had been confirmed—a 31-year-old victim from Allen, Northern Samar.

However, the Department of Health said it was still confirming the reported deaths in Northern Samar, on Burias Island and in Sorsogon, as well as six reported injured victims.

In the Bicol region, authorities credited the early evacuation of 720,000 people for what they believed would be a low death toll.

But he said the entire province of 1.2 million people was without power. “What we are asking for is the early restoration of electricity.”

Residents of neighboring Sorsogon were also without power on Tuesday, and authorities could give no guarantees if electricity would be restored by Christmas.

The storm toppled trees and cut electricity to at least seven provinces, the NDRRMC said. “Our target is to restore power by Christmas, but it will still depend on many factors,” Marasigan said.

She said the timing would depend on how badly damaged towns were, and how much cleaning up of roads was required before teams could go in to put up new power poles and lines.

Initial reports nevertheless showed that there was minimal damage to infrastructure in Albay, said Fr. Rez Arjona, social action director of the Diocese of Legazpi.

But the homes of some 100 families were destroyed in Pio Duran town, mostly in the coastal barangays, he said.

Power in main cities and towns in the province were restored by afternoon Tuesday.

Bishop Joel Balon declared that the first “Simbang Gabi” (dawn Mass) be a thanksgiving Mass in the Diocese of Legazpi, which was spared the worst of the typhoon, according to the social action director.

“It will be a very sad Christmas and a dark one because we have no power. But the important thing is everyone around me is still moving,” said 54-year-old rice farmer Noemi Pesigan of Bulan, Sorsogon.

Nona blew out the windows of Pesigan’s two-story brick-and-wood house and she survived the storm by sheltering in a nearby shop.

Four road sections—two in Bicol and two in Eastern Visayas—were not passable to vehicles, according to the NDRRMC. These were the Catanduanes Circumferential Road and the Panganiban-Sabloyon Road in Bicol, and the Catarman-Allen Road, La Vizares-Allen section, and the Pangpang-Palapag-Mapanas-Gamay-Lapinig Road in Eastern Visayas.

The Office of Civil Defense in Eastern Visayas identified the fatality in Northern Samar as Pascual Aniceto Jr. of Allen town. He died while he was trying to fix the roof of his house at the height of the typhoon.

In Samar province, two persons survived hours in the water after their boat capsized on Monday evening.

For the second straight day on Tuesday, Northern Samar and Eastern Samar remained without power. Communication lines in Northern Samar were also down. Globe Telecom submitted a report to the NDRRMC, claiming difficulty in 2G and 3G signals in the province.

Rosette Martinez, communications officer of National Grid Corp. of the Philippines, said inspection of lines was still ongoing and could not determine when power would be restored in the two provinces.

She, however, said power was restored in Samar province as of 9:23 a.m. on Tuesday.

The Calbayog City council on Tuesday passed a resolution declaring the city under a state of calamity.

In Cebu, more than 300 passengers were stranded after a flight bound for El Nido in Palawan was canceled because of the typhoon.

Flights to Tacloban returned to normal after these were canceled on Monday, said Merc Bahande of the Mactan Cebu International Airport Operation Control Center.

The Cebu Coast Guard station commander, Agapito Bibat, said 363 passengers remained stranded at the Cebu City port after the MV St. Leo The Great had not been not allowed to sail for Manila since Sunday.

But other vessels for Eastern Visayas have been cleared for sea travel after the weather bureau lifted the storm warning signal for those areas in Eastern Visayas.

In Iloilo City, trips of ships and boats bound for Bacolod City and Cebu were allowed to resume at noon on Tuesday. But those bound for Manila, Batangas and Mindoro were still suspended, according to Lt. (s.g.) Jomark Angue, the Coast Guard station commander in Iloilo. Reports from Joey Gabieta, Jennifer Allegado, Jhunnex Napallacan, Nestor P. Burgos Jr., Inquirer Visayas; Julie M. Aurelio with Marjorie T. Sia, trainee in Manila; and AFP