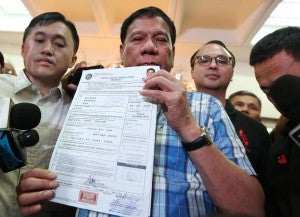 KIDAPAWAN CITY, North Cotabato, Philippines – Mayor Rodrigo Duterte has urged his supporters to just pray for him as he faces a disqualification case at the Commission on Elections, instead of massing at the Comelec main office in Intramuros on Wednesday, his campaign manager has said.

“Mayor Duterte is humbled by the public’s continuing support.  He urges all of us to respect the process by letting the Comelec go about its responsibilities,” Leoncio Evasco Jr., also mayor of Maribojoc, Bohol, said on Monday.

Evasco said the vigil at Comelec Manila, as planned by some supporters, has not been officially sanctioned, contrary to what the organizers have claimed.

The planned vigil on Wednesday, will coincide with the hearing of the disqualification case filed against Duterte over the manner by which he replaced Martin Diño of the PDP-Laban as a presidential candidate through the process of substitution.

“I would like to inform everyone that there is no official call made by the campaign organization of Mayor Duterte on this endeavor,” Evasco said.

He also disowned the planned Million People’s March in Manila, which some Duterte supporters had announced.

Evasco said like the vigil, Duterte has dissuaded his supporters from staging the march, which has been scheduled to take place before the end of December.

“We deeply appreciate the thought, (but) the gestures need not be carried out as Mayor Duterte already feels your warm support,” Evasco added.

He said Duterte supporters could still manifest their support for the mayor by just going to churches or praying in their homes.

God’s intervention will decide the fate of Duterte, according to Evasco.

The feisty Davao mayor has repeatedly said that the presidency is a destiny.

“If God wants me there, he will put me there,” he once said.  SFM