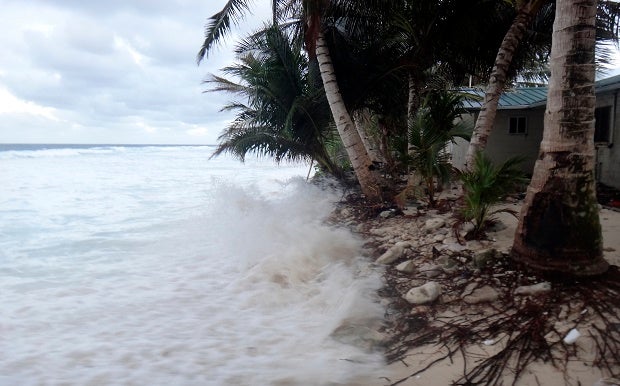 In this Jan. 21, 2015 photo released by Bikini Atoll Local Government, waves surge over the beck and onto the island during a king tide event on Kili in the Marshall Islands. Two king tide events hit the Kili in 2015 causing massive flooding over the entire island which left thousands of dead fish to rot after the waters resided. Climate change poses an existential threat to places like the Marshall Islands, which protrude only 6 feet (2 meters) above sea level in most places. Bikini Atoll Local Government via AP

MAJURO, Marshall Islands—Almost 70 years ago, the  people of Bikini Atoll left their homes to allow US nuclear testing, now the Pacific islanders’ descendants say they must move again—because climate change has rendered their new home uninhabitable.

Many of those Bikinians moved to Kili Island, which is 800 kilometres (500 miles) away but still part of the Marshall Islands archipelago.

The tiny stretch of land, less than one square kilometre in size, now home to almost 1,000 people, is around two metres (seven foot) above sea level, making it vulnerable to rising seas blamed on man-made global warming.

Residents say it is becoming increasingly uninhabitable; crops fail due to seawater creeping up into the soil and drinking water, while flooding and storms are increasing in frequency, regularly battering homes and villages.

When waves inundated Kili earlier this year, residents “felt as though they would all be taken out to the sea,” local councillor Lani Kramer told AFP.

She said: “(People) noticed the water coming inland and thought it was strange. Within one hour, the water was up to their waists. People were terrified. Some ran to the church as it’s on higher ground and camped there until the water slowly went down.”

Local government liaison Jack Niedenthal, like many Bikinians, feel the US owe a moral commitment to protect the islanders because their ancestors gave up their homes enabling America to conduct nuclear tests in the mid-20th century. Some hope to move to the US permanently, warning the situation is so dire they face a future as climate change refugees.

“It was the United States solution to put us on Kili Island. We shouldn’t have to use our own resources to pay for relocation.”

Residents of the Marshall islands are able to live, work, and study in the US visa-free but Niedenthal says the administration should pay for flights and a resettlement package. The US State Department was not immediately able to comment on the issue.

As world leaders meet in Paris tasked with signing the first-ever truly universal pact to curb global warming, Niedenthal said he also hoped major players would consider the plight of Pacific communities on the front line of the crisis.

He said: “We’re helpless, we can’t do anything on our own. All we can do is just ask bigger countries to take action.”

The woes of Kili are being experienced across Marshall Islands, where extreme weather has caused such problems that President Christopher Loeak warned life there would “soon become like living in a war zone.”

Speaking at the opening of the Paris COP21 summit last week, he called for strict curbs to limit global warming and five year assessments to see if targets could be improved.

READ: What’s behind movement for ‘high ambition’ in Paris?

“If we’re to win the battle against climate change, the fossil fuel era must draw to a close ,to be replaced by a clean, green energy future, free of the carbon pollution that is harming our health, stunting our growth, and suffocating our planet.”

The Marshall Islands has experienced an increased number of storms per year, and in 2014 recorded the highest king tides for three decades, which forced 1,000 to flee their homes and more than $2 billion worth of damage.

Climate change has also exacerbated the impact of an El Nino weather pattern currently gripping the western Pacific, with meteorologists predicting it will cause a nine-month drought extending from Palau to the Marshalls.

“We experience extreme weather, have floods on some of our islands and drought on others, and have severe erosion, coral bleaching and salt-inundation in our food crops and ground water,” Foreign Minister Tony de Brum told AFP last month.

Ocean inundation is now so common that Hawaii-based scientists have created a forecasting body—Pacific Islands Ocean Observing System (PacIOOS)—to give weekly projections on when they can be expected.

The normally placid lagoon on the Marshall’s capital Majuro was recently turned into a cauldron by storm surges and PacIOOS’s deputy director Melissa Iwamoto said islanders now had to cope with such conditions as part of everyday life.

“If the ocean swell is too high, the safety of fishermen transiting out of the lagoon to open waters is threatened,” she said.

“Homes and businesses may be flooded with seawater, roadways may become impassable and even the runway at the airport may be rendered useless for large commercial aircraft.

“This is the reality of islanders living on Majuro Atoll.”