What’s behind movement for ‘high ambition’ in Paris? 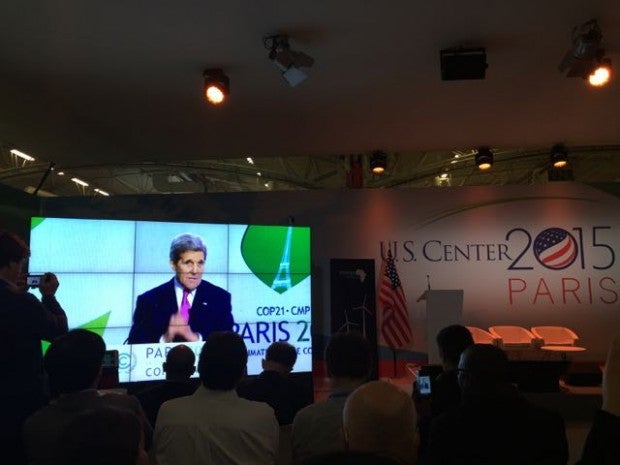 PARIS—US Secretary of State John Kerry made two announcements during an emphatic half-hour speech on the sidelines of the climate change negotiations here on Wednesday. He announced that the United States was “committing to double” its “grants-based adaptation investments” by 2020, from the current $400 million per year. And he announced his country’s membership in the so-called High Ambition Coalition.

“First and foremost, we need an agreement that is as ambitious as possible.  We don’t lose anything for being ambitious. Today we’re formally announcing—the United States—that we are part of what we are calling the High Ambition Coalition. This is a group of countries that is fully committed to ensuring that the agreement is a truly ambitious one. Addressing climate change will require a fundamental change in the way that we decide to power our planet. And our aim can be nothing less than a steady transformation of a global economy.”

“Ambition” is shorthand for the objective or purpose of the draft Paris agreement that is being negotiated, and is usually summarized in terms of a ceiling on the rise of the global average temperature. For the 21st Conference of Parties (COP21) meeting in this city under the United Nations Framework Convention on Climate Change, high ambition means choosing a cap of 1.5 degrees Celsius or lower since pre-industrial levels, rather than a cap of 2 degrees.

That is an objective that the Climate Vulnerable Forum has lobbied to see adopted. The Forum, chaired currently by the Philippines, is not a negotiating bloc but an advocacy group, but its voice has become unexpectedly influential in the negotiations. By the first week of the Paris talks, some 112 countries, including France and Germany, had committed their support for the 1.5-degree goal advocated by the CVF.

At the ministerial dialogue on December 8, the head of the Philippine delegation offered the most succinct summing up yet of the CVF’s definition of ambition. “For vulnerable countries, there is a single thing that will measure the ambition of the Paris agreement and it is a number: 1.5.”

Another group of countries, the Alliance of Small Island States or AOSIS, has also pushed hard for the under-1.5 goal.

At the start of the Paris negotiations, AOSIS reiterated its primary position: “the Paris Agreement must establish medium and long-term emission reduction pathways that are capable of delivering a limitation of temperature increases consistent with this below 1.5-degree goal. The Agreement must demand ambitious performance from Parties through internationally legally binding, quantified mitigation commitments that increase global ambition over successive commitment cycles.”

The group’s leading voice, Foreign Minister Tony De Brum of the Marshall Islands, identified four fundamental negotiating positions which those backing high ambition can support: “Strong recognition of the below 1.5-degree temperature goal, a clear pathway for a low-carbon future, five-yearly updates and a strong package of support for developing countries, including delivery of $100bn per annum.” The only element missing from the Philippine and CVF position is the advocacy of human rights.

The chief negotiator of the United States, Todd Stern, was the first to use the phrase high-ambition coalition. At a press briefing he conducted on December 7, he said: “There is a large coalition for high ambition. I referred to it as a high-ambition coalition. It includes, for example, island states, the least developed countries, various progressives in the developing world as well as the EU, the U.S. and a number of our so-called umbrella group, really all of our so-called umbrella group partners.”

Stern’s language and Kerry’s dramatic announcement have raised questions about possible American involvement in forming the coalition. Did they bankroll the coalition from the start, perhaps as a hedge against countries expressly skeptical of a 1.5-degree goal, such as India?

At least two negotiators have said, however, that what the United States must have done was to maneuver itself into the discussions and, by first directing attention to the movement and giving it a name, assume leadership of it.

The push for 1.5 has far exceeded expectations, but the “clean” text of the draft agreement released by the French presidency on December 9, around 3 pm, makes adoption less likely. Three options are now up for negotiation: Below 2 degrees, well below 2 (with a bracketed reference to 1.5), or below 1.5.

There is some overlap between the CVF and AOSIS memberships.