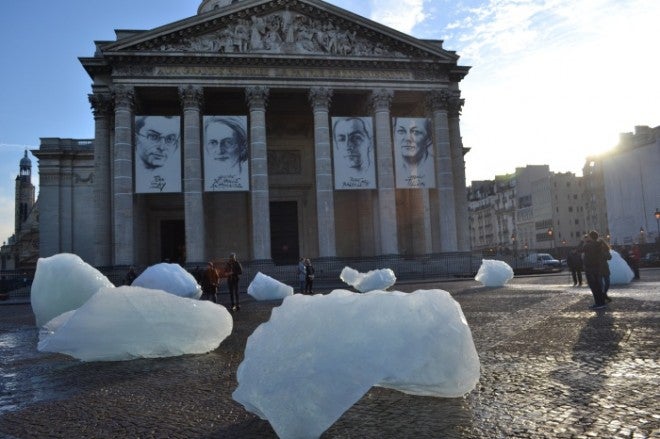 As negotiators work on the draft of a new climate treaty, blocks of ice from the Arctic, which had broken off from the Greenland ice sheet and were brought to Paris, continue their steady melting. Photo by Kristine Angeli Sabillo/INQUIRER.net

PARIS—The “collapse” of a three-year review of the 2-degree cap on global warming last Thursday has helped provoke a strong reaction in the ongoing climate talks in this city in favor of a much more ambitious target of 1.5 degrees Celsius. The growth in support prompted Philippine negotiator Antonio La Viña to say on Monday that the chances of a crucial mention in the draft agreement of the lower ceiling were now “50-50.”

The Earth Negotiations Bulletin, a highly respected reporting service that tracks the talks on a daily basis, noted that “some of last week’s disappointment regarding the lack of progress on the 2013-2015 review of the long-term goal was turning into hope as word of a ‘high ambition coalition’  spread among negotiators.”

Todd Stern, the chief negotiator at the climate talks for the United States, was among those who helped spread the word. At his Monday press briefing, he said: “There is a large coalition for high ambition. I referred to it as a high-ambition coalition. It includes, for example, island states, the least developed countries, various progressives in the developing world as well as the EU, the U.S. and a number of our so-called umbrella group, really all of our so-called umbrella group partners.”

The core of this coalition is the Climate Vulnerable Forum, a growing advocacy partnership with more than 40 member-states that is currently chaired by the Philippines. When the review of the 2-degree ceiling fell through, under pressure from oil-producing Saudi Arabia, the Philippines issued a short but very strongly worded statement. “We have to really question at this point the basis for not forwarding the draft text to the COP given the scale of the work undertaken and the gravity of the decision. The parties who stand in the way of recommending a sound decision based on the information available will be remembered by the children of today for the failure in Paris and we will shout it from the roof tops.”

Sec. Emmanuel de Guzman, vice-chair of the country’s Climate Change Commission and head of the Philippine delegation, immediately called an extraordinary meeting of the CVF on Thursday night to strengthen the group’s resolve to push the 1.5-degree target. Again, De Guzman did not mince words.

“Bringing dysfunction inside the negotiations to torpedo the Review of the 2 degrees goal in no way undermines the clear and present danger of a two-degrees regime and the need to strengthen the long-term goal. The Forum continues to pick up speed and I am pleased to acknowledge yet another country joining the Forum today, with the ascension of the Marshall Islands.”

Under the United Nations Framework Convention on Climate Change, the shorthand for discussion of temperature targets is ambition. As the negotiations stand, the issue in ambition is the choice between capping the rise in global temperatures at 1.5 degrees above pre-industrial Era levels, or at 2 degrees.

But the choice between 1.5 and 2, La Viña told reporters, “means choosing to sacrifice a few hundreds of millions” of climate-vulnerable people.

The CVF focus on the 1.5-degree goal has attracted the support of at least 112 countries, including Germany and host France. At the consultations conducted on Sunday and Monday, the discussion on ambition included how to frame a reference to 1.5 — a sign that the growth in support outside the conference was reflected inside the conference too.

“We sense the possibility of getting a reference to 1.5,” La Viña said.

Stern said the United States was “working with other countries on some formulation that would include reference to the 1.5 degrees, all as part of a somewhat larger, broader sentence. So we are working with our island friends and other developing country and other developed country friends in crafting language. So that’s in progress.”

The emerging high-ambition coalition is part of the reason why the chances of a strategic mention of the 1.5-degree target in the text of the new climate agreement have improved dramatically.

“Definitely it is better [now] than it was the first day,” La Viña said. “First day, it would have been 20 percent. A year ago, about maybe one percent.”

On Monday, the Philippines received a Ray of the Day award from the Climate Action Network for its leadership on the 1.5-degree goal. Renew Economy reported that the country was cited “for taking the stage during today’s ministerial statements, soon after Saudi Arabia, to promote a meaningful long term goal to stabilise global temperatures and to decarbonise global economies.” This was the second Ray of the Day award received by the Philippines; the first, given last week, was on behalf of the CVF.